The R&B gospel single by PATRICK JEAN-PAUL-DENIS is getting some club and radio play. Manja Visser quizzed the London-based singer. 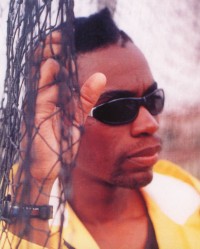 25-year-old Londoner and R&B gospel artist Patrick Jean-Paul-Denis has been busy in the music scene for 10 years. First with the band One Touch, now as a solo artist, his single "Special Love" is currently in the mainstream stores.

When Patrick left One Touch, he was out of the music scene for a few years. That was until he became a Christian. "The Lord told me to go back into music," says Patrick. "He wanted me to sing! And that was a real step of faith because the only experience I had was playing guitar in my former band." Being influenced by the Winans, Patrick developed as an R&B/soul singer. He has his own Vocal Academy where he gives singing lessons. 'Together with that, I am a full time artist."

Released in the mainstream market is Patrick's single "Special Love". "The song says that God is the way, not the world. It actually deals with the battle between the spiritual world and the physical world," says Patrick. The single, which has already been played on non-Christian radio, is brought out on the mainstream Opaz label. Rather strangely the label is mentioned a few times in "Special Love". "It's just a business gimmick," says Patrick. "But it's a good one, 'cause it says that Opaz is on a mission! And Opaz is not a Christian label at all!"

According to Patrick, some effort is needed to get recognition in the mainstream market. "The reason why there is not much attention for Christian artists is the lack of sales. If you want to make it in the mainstream circles, then you have to do something for it. Maybe even putting your own money into it!

Patrick has just recorded an album entitled 'Father...Now The Children Will Listen'. It's due out early autumn. Patrick explains the title: "When I was working in the studio the other day, a girl from the band Incognito came in and she heard the song 'Miracle'. She really liked it and said, 'Father, now the children will listen.' So I decided to keep that as the title.

"I can mention the name of Jesus in my songs as many times as 1 want," continues Patrick enthusiastically. "That's really a great thing, when you remember that Opaz is a non-Christian label. In my songs, I deal a lot about what's going on in the world today. The song 'Father' for instance talks about a man who has a girlfriend and he wants to know if she is the right one for him. So he is asking God about it."

At this moment, Patrick is satisfied with his musical style. "But I am always looking to improve my songs lyrically." Patrick reveals his plans for the future: "I will continue obeying the Lord, do what he wants me to do. I will try to bless people, to excite them with my music. All I want is to glorify the Lord in everything I do."

The opinions expressed in this article are not necessarily those held by Cross Rhythms. Any expressed views were accurate at the time of publishing but may or may not reflect the views of the individuals concerned at a later date.
About Manja Visser
Manja Visser is a young lady from the Netherlands who recently enjoyed a period of work experience at Cross Rhythms.