Tony Cummings reports on the 'It's Christmas' album by Melbourne, Australia's PLANETSHAKERS 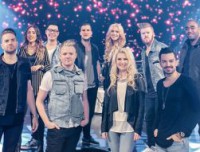 Joth Hunt also produced and wrote, co-wrote and/or arranged all of the songs on the album, including the highlighted David Foster and Carole Bayer Sayer-penned cover, "The Prayer (Italian Lyric Version)". The lead track on the album, "Angels We Have Heard On High", has additional lyrics by Hunt embedded in a voice-layered pop mix, while the original song "It's Christmas" was co-written by worship leader and pastor Sam Evans.

Talking about the new song "All Glory", Hunt said, "I wanted to write a song from the perspective of the three wise men. If you think about it, it's pretty amazing that they followed a star and found Jesus in a manger. They came and worshiped him and brought him the best gifts that this world could offer. In this song, I have tried to capture the classic feel of Christmas, but also have a foundational element of worship. That's what the wise men came to do; worship Jesus."

'It's Christmas' also includes tracks from Planetshakers' EPs 'Christmas Vol 1' and 'Christmas Vol 2', with the group's pop rock and R&B sounding renditions of yuletide oldies like "O Come All Ye Faithful", "Joy To The World", "Silent Night" and "The First Noel". Said Hunt, "There are so many amazing Christmas carols out there, with such great lyrics and memorable melodies. With this album, we have taken these traditional lyrics and melodies and given them a new sound by adding modern music and production. I have had so much fun producing this project and being creative. We have also written three original songs for the album. . . For us, this recording encapsulates what Christmas is all about; celebrating Jesus!"