Vicky Beeching: A worship leader with a degree in Theology 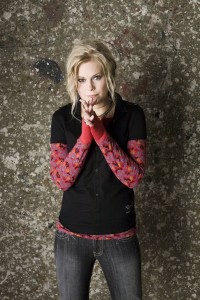 Tony: I understand that you became a Christian at the age of seven. Tell me about that.

Vicky: I grew up in a Christian family - that's something I'm really grateful for. God was a big part of our lives; going to church, Sunday school, hearing Bible stories at bedtime. I'm so thankful for those early foundations in my faith. My Mum began teaching me the piano when I was seven. After our first lesson together, I asked her some questions about Jesus. I did this regularly - usually as a cunning plan to delay bedtime! On this occasion, Mum asked if I wanted to invite Jesus into my life. I said yes and she led me through a short prayer. I remember feeling overwhelmed and tearful, but not knowing why. Now I realise it was the Holy Spirit touching me as I gave my life to God.

Tony: How did you become a regular worship leader?

Vicky: After a lot of practice in my bedroom, I started playing guitar in my youth group band at St Mary Bredin, Canterbury. When I'd been part of the band for awhile, the worship leader gave me the opportunity to lead a few songs. I remember feeling so nervous when I first led and wondered if I'd ever be able to relax and enjoy it! Thankfully that did come with time! I continued to lead worship at the youth group and started training up younger people too. During the following months and years I also played regularly at other local churches, countywide youth events and conferences. Moving to Oxford in 1997, I joined the Vineyard Church. I started leading worship in one of their house groups and later was given a regular slot as a Sunday morning worship leader.

Tony: I first came across your name when Beth Redman sang your song "Search Me O God" on Soul Survivor's 'People's Album'. How did that come about?

Vicky: I wrote my first song when I was about 10. It was during a music lesson at primary school. We were preparing music for our Leaver's Assembly, as my class were moving on to our next schools. I came up with a song idea, based on the theme of 'moving on'. After writing a chorus, verses just kept coming until I had about six, all describing different stages of our time at the school. To my surprise the whole class was asked to perform it! Over the next few years I wrote a lot of classical piano pieces. When I started playing guitar, I found it easier to write songs. As my relationship with God deepened, worship became the focus of my writing. "Search Me O God" was one of the first worship songs I wrote, aged 14. At Soul Survivor 1996, Mike Pilavachi announced that anyone could submit songs for 'The People's Album' project. I sent in a few and "Search Me O God" was recorded by Beth Redman. I received my copy of the CD on the morning of my 18th birthday - a great present!

Tony: Not many worship leaders do degrees at Oxford University! Was an academic pursuit a help or a hindrance to your faith?

Vicky: When I first thought of applying to Oxford to study theology, many people tried to dissuade me. They were concerned that my faith would be damaged or destroyed. Lots of people advised me to go to a Bible College instead, where they felt my faith would be encouraged and strengthened. After much thought, I decided that Oxford was the right option for me. The course was challenging, as I had never put my beliefs under a microscope before! I was grateful that during all three years of my degree I lived in a Christian hall of residence. Tutors such as Alister McGrath and Michael Green were based there. They helped me with the difficult questions that arose from the course. The combination of their Godly advice and being plugged into a great church, kept my relationship with God solid. I definitely came out of Oxford University with a stronger faith, as it had been taken apart, examined, then rebuilt on a very firm foundation.

Tony: How did you get songs on the 'Hungry' and 'Holy' albums?

Vicky: During my first year at Uni, Vineyard Music UK decided to record their first album 'Come Now Is The Time'. They wrote to the UK Vineyard churches, inviting them to submit songs that their members had written. I sent in two, but they weren't chosen that time. The following year, they decided to make a second album ('Hungry'). I decided to try submitting songs again and "There's No One Like Our God" was selected. I did the same for the 'Surrender' and 'Holy' albums, and had two songs accepted for each project. I would encourage writers to keep submitting songs, even if you get turned down to begin with! It's tough, but it's worth finding the courage to try again if you feel God is calling and gifting you as a songwriter.

Tony: You've already made considerable ground as a composer. Is singing as important to you as composing?

Vicky: Yes, I've always loved singing. I remember a particular children's song book I had when I was little. I used to take it up to my room and sing my heart out for hours - I was easily occupied! My Dad has always been a huge '60s music fan, so I used to sing along to the records he played. I was also part of a traditional church choir, wearing robes and accompanied by a pipe organ. So my early days of singing were pretty diverse! Singing and composing go hand-in-hand for me and both are equally important. I really enjoyed singing my own songs on 'Shelter' and look forward to recording more albums in the future. I'm also excited about singing at various conferences and events this year and using my new songs there.

Tony: We read so much about the Church losing ground, particularly amongst young people. In your contact with young people, how do you find them responding - particularly to the call to live a life of holiness?

Vicky: I find it so painful to read about young people leaving the Church in the UK. However, I also find it hugely encouraging to go to events like Soul Survivor and see young people who are passionate about God! I tried to go to Soul Survivor Week B last summer but it was fully booked up - I was disappointed not to get in, yet really excited that so many young people wanted to be at the festival! I know there are a lot of teenagers in the UK who are serious about living holy lives. Many have responded to Rebecca St James's "Wait For Me" book and song, as well as the True Love Waits campaign. Both of these encourage young people to value sexual purity. Seeing lots of kids wearing WWJD bracelets is also really encouraging. One of my favourite moments in the past few years was a ministry time at a youth conference. A guy had spoken on Holiness and announced that the ministry team had black sacks, in case anyone had stuff they wanted to get rid off. In response to the call to holiness, young people streamed forwards and the bags were filled up with all kinds of magazines, substances and other things that they were letting go of. It made me cry. I'm sure similar things are happening all over the country.

Tony: What are your hopes and plans for the future?

Vicky: I very recently gave up my job with a management consultancy firm to pursue worship ministry full time. So, I'm excited to see what God has in store for 2003! I have a number of events booked in and am looking forward to leading worship in the UK and overseas. Conferences in Melbourne and Sydney will be a particular highlight, as they will be my first visit to Australia. I'm also keen to start mentoring young, female worship leaders. Another thing I want to explore more deeply in the coming years is the relationship between worship and evangelism.

"Give me a child until he is seven and I will give you the man". Both the Jesuits and Hitler knew the power of indoctrinating young children. They can be made to believe any nonsense. They can even feel grateful for their indoctrination.
So cruel.