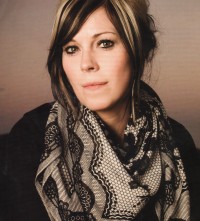 Considering that worship leader and songwriter Vicky Beeching had her first recording in 1997 (her song "Search Me O God", sung by Beth Vickers, appearing on the first Soul Survivor 'People's Album') she has hardly been prolific. Until this year that is. Kingsway have released a Best Of compilation of Vicky's recordings, 'Extravagant Worship', while Integrity have issued a Limited Edition 3 Track EP followed by the singer/songwriter's critically acclaimed 'Eternity Invades' album. Vicky has also been much interviewed in the UK Christian media though it's only been the recent interview with Cross Rhythms broadcaster Mike Rimmer that has revealed the fact that the Canterbury-born songsmith is returning to spend a lot of her time in the UK. As she told Mike, "I spent the last six years based entirely in the States, living in Nashville and then in California, really focused on the call to mission out there. With it being such a big country, I dived in and didn't really travel anywhere else. But after six years of that, I felt God saying, 'Now's the time to focus back on England'. I have a base in both countries, and I'm going to be splitting my time about 50-50 between the two. So I'll be at home more eating fish and chips under the British skies."

The place where Vicky will be making her UK base is, not surprisingly, Eastbourne. "I actually love it: ICC studios are here, Integrity-Provident is here. One of the things that actually pre-empted the move back was I'd joined the leadership team of Spring Harvest, Europe's biggest teaching and worship conference, held every year at Easter. I'm overseeing worship for them, helping them put together training and a position paper on what their theological approach to worship is, deciding who comes to lead worship and what guidance we give them in selecting songs. So that keeps me quite busy, in addition to all the touring and the writing."

Vicky recently turned 30. She commented, "Turning 30 is always an interesting time. I kind of feel a bit old, but then having crossed into my 30s I now feel ready to change things. My 20s was more God changing me, rubbing off all my rough edges and showing me what this thing's all about, and now in my 30s hopefully I can give something back, having something worth saying."

The singer/songwriter is only too aware of modern church life's reliance on worship songwriters. Vicky told Families First magazine, "Worship leaders are the theologians of our day. Kids aren't reading Tozer, Lewis or the Church Fathers. They are getting out their iPods and listening to music. Lyrics have to convey the theology of who God is."

In 2006 and 2007 EMI CMG's Sparrow Records released Vicky's albums 'Yesterday, Today & Forever' and 'Painting The Invisible'. But now she has moved to another big American Christian music label, Integrity! Music. She spoke about the move: "It was a really difficult decision. Sparrow were downsizing, they lost a lot of staff; there were a few artists they said they couldn't continue to go on with in the States. There were a bunch of us who just got left with the option, if we wanted it, of moving onto someone else. I didn't dislike Sparrow, but for my kind of music it didn't feel like a great fit. They really want radio and CCM, and the worship elements of it are actually handled by SixStepsRecords, not Sparrow, and I didn't really know that back in the day when I signed. Sparrow don't have any people who you'd know of who are worship leaders as we would understand it. I had a chat with Integrity, and they only produce corporate worship music, so I knew that it would be very easy for me to write congregational songs and I wouldn't get pushed to try to make them into radio singles or performance songs. So really I couldn't base decisions on labels, because Kingsway UK is fantastic, and Integrity UK is fantastic, so choosing between those two would be pretty much impossible. It was really just about in the States what it was like for me, and what expectations were on me in terms of my writing; with Sparrow, I brought along to the table what was corporate worship, and they'd usually try to pair me up with a radio writer, who would say the song was too simple and boring and repetitive - too long, you know. With Integrity over there, that's exactly what they want, songs for the Church, so it was actually the American side that really made the decision for me."

To build up interest in her forthcoming album Integrity released a taster Limited Edition 3 Track EP. Vicky told Christian Marketplace magazine, "Of the three songs probably my favourite is called 'Deliverer' which is a song about the freedom that God brings in worship. I'm really passionate about that environment. It's so much more than singing, it's actually the Kingdom of God breaking in at that moment and anything could happen."

There's a much edgier sound on 'Eternity Invades' than that heard on her two Sparrow albums. Commented Vicky, "I think I was just so ready by the time we made it to make something I was actually pleased with. I got more into electric guitar and band stuff, and I hope the lyrics are challenging in terms of pushing people to a new place - whether it's asking for deliverance or healing, or the words in 'Break Our Hearts' where it talks about needing to actually live out the things we sing. I hope it's not just an easy listen."

One of the outstanding tracks on 'Eternity Invades' is "Inhabit The Praise". Vicky spoke about the song. "We don't really have the expectation that God can actually show up, the supernatural exchange where the Kingdom of God comes to heal and to deliver and to save. I think we can see it as just us singing into the air. Or maybe warming ourselves up to hear the preaching. But that Scripture about God inhabiting the praises of his people for me is a reminder that he is fully present as all three people of the trinity, there to do his work and let his Kingdom come in. So the song is a prayer that he would inhabit our praise, that we would be expectant that anything could happen in that context. We almost put it first, because it sets the tone for what we're trying to achieve. I actually use that a lot when I open sets. Often I'll start a worship time and pray: 'God, would you come and inhabit the praise of your people?' Now I have a song that says it, and often kick things off with that. Worship leaders I speak to struggle to find opening songs; I'm hoping that one will be a good resource to help people open up their worship times."

Another standout on the album is "Breath Of God", a Beeching song which was also on the Spring Harvest live CD. Said Vicky, "It's a prayer that God will actually breathe life into us, that we would have his life. I really want songs that aren't just about singing to God or about who he is; more about inviting his Kingdom and his presence to work in our midst, so we leave changed. I think that's one of the things missing in worship because often we're complacent because we're singing songs or telling God we love him. But it's actually a place of expecting that holy, exciting danger where anything could happen. That's what I want the album to encapsulate."

Vicky spoke about her Women In Worship website: "The inspiration came over the last 10 years. Often I'd get to the end of leading worship somewhere, and a whole queue of people come and say stuff. Most of them will be girls, and most of them will say we either want to lead worship, but didn't know we could, because we've never seen a woman doing it - or, we're worship leaders in our church, and we feel very isolated, we don't have anyone to connect with. Based on both of those, I felt like I needed to use my passion for social network, and geekish online stuff, to create some kind of cyber-community for everybody. I guess, as a woman worship leader, that really is something that I can help people with. There are a lot of resources for people who lead worship, but there isn't really anything online for females. It wasn't that I wanted to leave anyone out, it just seemed like that was what God was putting in front of me. 7000 hits since it was launched. There's a membership area inside, that's a bit like a mini-Facebook, to join for free, and you can meet other worship leaders from your city or country, and ask each other questions."

Having been a long established worship leader and songwriter Vicky is only too aware of the Christian music industry's wholesale swing towards praise and worship and the tensions that has caused. She said, "I think a lot of people are very aware of the bandwagons that got jumped on by so many people. Suddenly CCM basically became about worship. I've been party to conversations - I wish I hadn't - where I've heard people saying that worship music is the only place where there's money, and everybody's kind of becoming a worship leader. That has worried me, especially during my time in Nashville, to witness bands that had never ever seemed interested in corporate worship suddenly putting out worship albums. I guess now there's so much, the market's so saturated, I think people are tired and they're looking for something different. I would interpret that as God's way of shaking things up a bit, and hopefully bringing a fresh thing."

Vicky is also very aware how discouraging it currently is for Christian ministry artists who AREN'T performing corporate worship. "We were talking at Spring Harvest the other day about our after hours programme - we have stuff in the evenings after celebrations - where people come to see bands. We were going around the table suggesting British bands, not worship leaders, and it's actually very difficult to name very many. So I do think that those people who aren't worship leaders do have a very specific niche, and people do want and need that. It would be easy for people to think, 'I'm not a worship leader, nobody wants me'. But it's getting to the point now that so many people [are performing worship music] that we'll see more and more need for CCM."

This is quite refreshing as I have found over the last few years only worship music is encouraged in churches, being a christian folk singer/ song writer I often feel the gift the Lord gave me as unworthy of any recognition or use in churches.