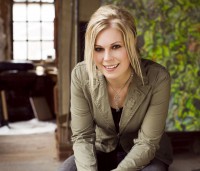 WELL-KNOWN British singer, songwriter and worship leader Vicky Beeching, who in recent times has courted controversy in Christian circles by announcing that she's a practicing lesbian, has written her story, Undivided: Coming Out, Becoming Whole, And Living Free From Shame. It is published by HarperCollins. A long interview in the 22nd June edition of Church Times recounted a meeting the singer had with her missionary grandfather. He offered to buy a set of CDs containing Christian teaching and how to be healed of homosexuality. The article recounted, "After a two-hour conversation, they arrived at a point of agreement: a quote from another Evangelical, Billy Graham: 'It is the Holy Spirit's job to convict, God's job to judge, and my job to love'."