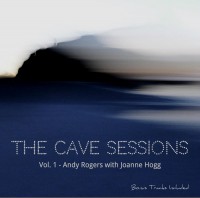 BRITAIN'S Andy Rogers with Joanne Hogg have released 'The Cave Sessions Vol 1'. The CD/DVD project is being described as "recorded live in an Irish cave: 'The Cave Sessions' are a reinterpreting of some 3000 year old Middle Eastern songs (psalms) written by a refugee musician whilst he was hiding out in caves! You can have them for whatever price you decide!" The DVD documents the recording of 'The Cave Sessions' at The Boatman's Cave, Ballintoy.