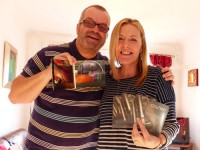 THE FIFTH album recorded by Nigel Cameron and Julie Cameron-Hall on their Sounds Of Wonder label has been released. 'Celtish Christmas' is described as "Traditional Christmas carols given the full Celtic treatment with some new and alternative melodies thrown in to enhance the timeless poetry." Guest musicians on the project are Dave Bainbridge and Phil Hart. Read a band statement, "Under the name 'Celtish' we seek to use Celtic music as a vehicle to dispel some of the myths about the ancient Celts, to share our personal stories and Christian faith, and to help build bridges between Church and community at home and especially abroad."