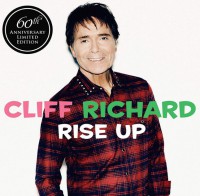 THE COME BACK of the 78 year old pop star Sir Cliff Richard is complete with his new album 'Rise Up' recently entering the UK pop album charts at number four. It is currently at number 15. Cliff was this week the subject of a much-praised TV documentary 60 Years In Public And In Private. During the documentary he said about the verdict of his recent court case, "I didn't punch the air - I thought: Okay, justice." He also said to camera, "I refuse to be fodder for the media."