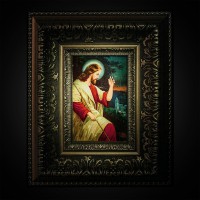 TEXAS-based, Nigerian-born rapper S.O. is courting controversy with his latest single, "White Jesus", from his new album, 'Augustine's Legacy', set to be released on 6th September. S.O. makes a number of declarations in "White Jesus". He raps, "White Jesus killed my people and enslaved us", "that white Jesus that you worship is a racist" and "Christ was not a hippie picking lilies in the field." As the opening to the second verse, he adds, "Do you know how hard it would be to find a white dude walking around the streets of Galilee in the 1st century? It's like Bigfoot riding a unicorn on top of a rainbow."