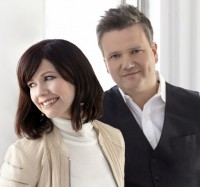 THE INTERNATIONALLY renowned hymnwriters Keith & Kristyn Getty are behind the second album in the Getty Kids Hymnal series released last month by Integrity Music. 'For The Cause' "was recorded by the Getty Band with kid friendly arrangements and five different children's choirs from around the world including the African Children's Choir."