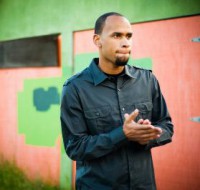 CALIFORNIAN rapper Nomis has released the single "My Two Sense". Read a press release, "In 'My Two Sense' Nomis offers us a dose of reality with a tablespoon of cynicism. Even Mr "Socially Just" himself has times where fighting the good fight leads to moments of callous frustration. Frustration with hyper patriotism, the Church, a distorted American history, and the hard truth of watching your dreams become further and further from your grasp. Ultimately Nomis insists on continuing the 'good fight' as he finds new life in the birth of his first born son."