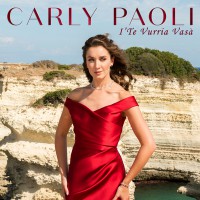 BEST SELLING classical artist Carly Paoli, in celebration of her Italian roots, has released as a single a song rarely by performed by sopranos, "I' Te Vurria VasÃ ". Written and composed by Vincenzo Russo and Eduardo di Capua in 1900, and first played to Carly by her Italian grandfather, this story of an impossible love has long been a favourite of Italian tenors including Andrea Bocelli. Carly's version was recorded at Abbey Road Studios. Said the singer, "It was interesting during the recording, and later the filming of the video, to identify and characterise the voice behind the lyric as a woman. Looking at it from a woman's perspective was an exciting element that brought into light a new drama in the lyric."