Song To The Moon 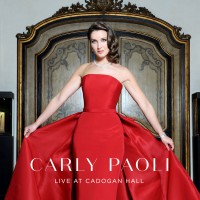 CLASSICAL artist Carly Paoli has announced the release of her album 'Live At Cadogan Hall', where she performed her debut UK headline concert in February. The Brit nominee also released a taster from the album, "Song To The Moon". Speaking of the album Paoli said, "We simply had a determination to showcase music from different genres, songs that I love and that we thought you would too and songs that allowed me to do what makes me happy; perform great music in front of an audience."