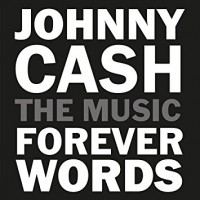 A 16-TRACK album 'Forever Words' featuring some of the 2,000 previously unpublished writings, poems and lyrics by the late country icon Johnny Cash will be released on 6th April. 'Forever Words' accompanies the 2016 book of the same name and features new music from Cash's sisters Carlene Carter and Rosanne Cash as well as friends and admirers including Willie Nelson, Alison Krauss, Kris Kristofferson and Elvis Costello. Johnny Cash's son, Carter Cash, who produced the album, told Mojo magazine, "I approached people with one to three pieces I'd picked out for them. Brad Paisley sat down and wrote the melody to 'Gold All Over The Ground' on the spot, and I just recorded it on my phone." Paisley's track, along with a contribution from the late Chris Cornell on "You Never Knew My Mind", are, according to Mojo, the album's centrepieces.