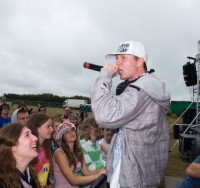 ROCK RAPPER Manafest from Ontario, Canada, has released the Kickstarter-funded album 'Stones'. Said Manafest, "I haven't done a full on rock record since 'Fighter' and 'The Chase'. It's time to bring a new spin on what I'm best known for and I know my fans love. 'Stones' is a window into the struggle we all face when obstacles, rejection and the unexpected is thrown in our path. I have been so blessed to play music as a full-time career for over 10 years and it's because I have such amazing fans."