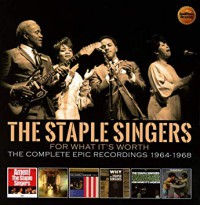 OLDIES specialist label Cherry Red Records have released a six-album, three-CD box set featuring all the recordings the R&B/gospel group the Staple Singers made for Epic Records. 'For What It's Worth: The Complete Epic Recordings 1964-1968' features 66 tracks including songs written by Bob Dylan, Buffalo Springfield, Burt Bacharach and Hal David as well as numerous original compositions by Pop Staples.