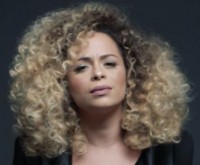 THE FORMER singer with Group 1 Crew, Blanca, now a successful solo artist, has released a single, "Shattered". It is the title track from the R&B gospel singer's upcoming album which will be released in autumn this year.