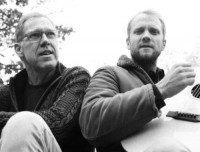 THE LONG awaited return to the recording scene of US singer/songwriter Chris Rice took place on 4th January with the release of the independent album 'Songs We Wrote On Tuesdays' by Ripp+Rice. Chris Rice enjoyed several major Christian radio hits, including 1997's 'Deep Enough To Dream', 1998's 'Past The Edges' and 2007's 'What A Heart Is Beating For', before stepping away from the recording world to concentrate on the visual arts, including photography and painting, and publishing a book of poetry. Andrew Ripp is a singer/songwriter who has released five albums between 2008 and 2015 and whose music has been described by Christianity Today as "soulful, Chicago-style blues, with folksy Nashville-flavoured bluegrass."