A Jewish Perspective On Recent UNESCO Resolution About Jerusalem

Paul Calvert spoke with Steven Jaffe, the Grassroots and Advocacy Consultant, for the Board Of Deputies Of British Jews, the only democratically elected, cross-communal, representative body in the Jewish community. 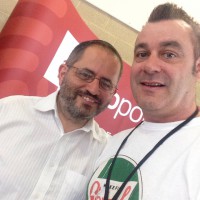 Paul: What is the Temple Mount?

Steven: The best way I can answer that, is that yesterday in the Jewish calendar was a fast day called Tisha b'Av. It's a commemoration of the destruction of the first and second temples of Jerusalem. Isn't it amazing that 2000 years after the Roman destruction of the temple and two and a half thousand years after the Babylonian destruction of the temple, the Jewish people are still commemorating those tragedies as a fast day? The Temple Mount in Jerusalem is where we understand the temple was situated, the Holy of Holies. It is the central place of Judaism and the Western Wall, which many visit, Christians, Jews and others, is an outward retaining wall of that temple structure, which was on the Temple Mount.

Paul: Is this the holiest place in Israel for Jews?

Steven: I think for Jews around the world it is the holiest place. Wherever we pray, whether in London, New York, or in Singapore, we are turning towards Jerusalem and more particularly towards that Temple Mount. So yes it is absolutely central to the Jewish people, as it is in the Christian tradition as well. We read in the New Testament that Jesus was in the temple, so it is part of Jewish and Christian tradition, of the importance of Jerusalem as the place where the temple was located.

Paul: The Jews really have history here, it's not only the Temple Mount, but there are other things that have happened there as well.

Steven: Totally, I mean in terms of Jewish tradition, we believe this is the site where Abraham took Isaac in the famous story of the sacrifice of Isaac, when God intervened. This is believed to have happened on that Temple Mount, so the connection in Jewish tradition goes right back to our origins as a people. It is of course, also the place where David made his capital, moving from Hebron to Jerusalem.

Paul: UNESCO have recently had a resolution. What was that resolution and what does it mean?

Steven: UNESCO is a United Nations agency and they have passed a series of resolutions about Jerusalem. Essentially they refer to the Temple Mount only in terms of its Arabic and Islamic name, refusing to acknowledge it has any significance to either Jews or Christians. They also refer to the Western Wall by its Arabic name.

What the UNESCO resolution is saying, is that this is occupied territory. In other words the Israelis have no right to be there and they are there as an occupier. Of course Arab states might say that, but actually when you look at the countries that are voting for this resolution, or abstaining from it rather than voting against it, you see a huge cross section of the nations of the world, for example Brazil, voting for that kind of resolution and denying the Jewish people and I would say the Christian peoples biblical connection to Jerusalem.

Paul: Are they saying to every Jew and Christian you're a liar, and you have no history here?

Steven: Well they are certainly saying you have no history here. They are not saying you are a liar in so many words, but that is the only interpretation you can give.

Now the Israeli situation is that Israel has respected the rights of Muslims to pray on the Temple Mount; in fact they are the only people who are permitted to pray at the Temple Mount; Jews and Christians can visit, but in deference to the Muslim presence there we are not allowed to pray there. It's called the status quo. Israel would be unique in the world, to have taken control of an area of so much spiritual importance to it and yet acknowledged the right of worship of others on that site, and beyond that to have restricted the rights of their own people. Yet that is not respected, or acknowledged. In terms of the resolutions that are being passed and what is being said by the Palestinian Authority, it is actually being thrown back in Jewish faces, that we have no right to be there.

Paul: Recently there was a terror attack that started from the Temple Mount. Tell us about that.

Ol Rappaport, thank you for your initial concern and for investigating matters for yourself.

I think you will understand my concern better when you consider the Palestinian Authority's own interpretation of a recent UNESCO resolution - please watch this short video https://www.youtube.com/watch?v=sRqFY0m4VXI

There have been a series of UNESCO resolutions, not just the one you have looked at. Take a look at the commentary and link to the resolution here which I describe in the interview:

I think the Arabic name of Jerusalem might be a bit more complicated than simply dismissing as a Muslim name.

However, reading the resolution referred to and other online UN resolutions / memoranda / articles leaves me with the impression that the official UN line is that Israel should not exist - although they stop short of actually saying that.

However, before reading the previous comment, my reaction to the article was the reference to "fast day called Tisha b'Av" - wow!

What a call to the Jewish people whether scattered or in their homeland to consider why Jerusalem was destroyed and for them to return to their God.

I was therefore surprised to read the fourth paragraph '[The Executive Board] Reaffirming the importance of the Old City of Jerusalem and its Walls for the three monotheistic religions,' in contradiction to the article's claim of 'refusing to acknowledge it has any significance to either Jews or Christians.'

I am very disappointed to read such a misleading article.