Josh Reinstein from the Knesset Christian Allies Caucus talks about his work building relationships between Jews and Christians direct from Parliament; and the effects the BDS (Boycott Divestment and Sanctions) is having on the people of Israel. 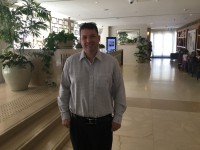 (Credits on all photos: The Jerusalem Channel)

Paul: First of all Josh what is the Knesset Christian Allies Caucus?

Josh: The Knesset Christian Allies Caucus is a group in the Israeli Parliament. It's members range from left to right, religious and secular who work together to mobilize direct lines of communication, co-operation and co-ordination with Christian leaders around the world. Whether it be political leaders, leaders for organisations or churches. We realise that in the 21st Century there needs to be a new relationship between Jews and Christians in support of Israel who work to develop what we call faith based diplomacy.

Paul: Is that relationship good at the moment?

Josh: Absolutely. I think that this year is probably the most successful year for faith based diplomacy. A lot of things that we are seeing around the world; from the Tel Aviv embassy move to Jerusalem, the US embassy to the Guatemalan embassy to a lot of the anti-BDS legislation are happening because of grass roots Christians making a stand and demanding their parliaments and their governments to stand with the state of Israel.

Paul: You just came back from the UK and spoke in the British Parliament. What were you speaking about inside Parliament?

Josh: We met with our sister caucus, the British Parliamentary Israel Allies Caucus. It is headed up and chaired by a member of Parliament, Mark Pritchard. He hosted an event to discuss BDS, the newest form of Anti Semitism and EU regulations on labelling goods from Judea, Samaria, Jerusalem, and the Golan heights. We see this as a revitalisation of the Nuremburg laws of the 30's where they are once again labelling Jewish goods unfortunately in Europe.

Paul: So this was members of the Knesset and British parliament meeting together. Which MK's from Israel went and which MP's did you meet in the UK? 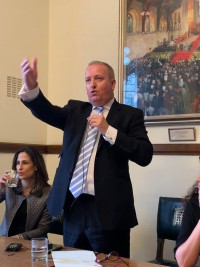 Josh: We came with two members of the Knesset and we met with several MP's and a couple of Cabinet ministers as well. I don't remember all their names as I said it was hosted by Mark Prichard. We always try to do everything bipartisan here. Someone from the Likud Sharren Haskel, who is the acting chair person of the Knesset Christians Allies Caucus, as well as Orit Farkash-Hacohen, who is from the blue and white opposition party. These issues like BDS and anti-Semitism are not partisan politics here, both the right and the left stand together against this new form of anti-Semitism.

Paul: How dangerous is the BDS movement and are they powerful and are they winning the boycott of Israel race?

Josh: I think they are losing the boycott of Israel race. We can see this in trade all over the world. The anti-BDS legislation is in 27 states, which kind of took three and a half trillion dollars off the table for any company that wants to be involved in BDS, so it's really been effective. We saw this with the case of AirBnB where they had to retract their boycott of Judea and Samaria. The problem with the BDS is that it's becoming something that is seen as normal and mainstream. Anti-Semitism have basically taken the idea of boycotting Jews in the 30's and they have just replaced the word Jew with Israel, so instead of boycotting Jewish professors they say boycott Israeli professors. Instead of saying don't do business with Jewish businesses, they say don't do business with Israeli businesses and it is a very scary thing to see this become talked about in the main stream. We have members of Parliament in the UK who are supporting the BDS and to be anti-Semitic like that is a dangerous policy.

Paul: It's basically anti-Semitism wearing a different hat isn't it? And it's trying to be more legitimate because you can't be anti-Semitic.

Josh: I think that all anti-Semitism is the same but they try to mask it in different ways. They talk about the blood libel of the Jewish people and where they said that we were using Christian children's blood to make Matzah for Passover, now they are saying we are giving poisoned candies to children in Gaza. It's the same idea, the evil Jewish people coming in and usurping another land. But think about it logically, what people have a greater claim to the land of Israel than the people of Israel. This is the same virus of anti-Semitism that we see spreading all over the world. In Europe they started this idea of saying we are anti-Zionist not anti-Jewish and I think today that mask has kind of fallen and a lot of them are saying OK we don't like Jews too. It's not just Israel they are against, it's also circumcision, kosher slaughter and it is getting to an extreme in Europe that we haven't seen since the 1930's. I think that people need to wake up and realise that this anti-Semitism is the same roots of all anti-Semitism that we have seen throughout history and it's very dangerous.