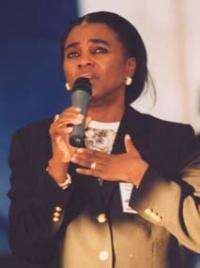 As captain Chris Cole endeavours to steer the good ship Cross Rhythms through the stormy waters of Christian media, he, and all the CR crew, know with certainty that without prayer Cross Rhythms would have floundered and sunk years ago. At the commencement of each working day at Cross Rhythms' Conway House headquarters the team of paid workers and volunteers have a prayer meeting which sometimes lasts for more than an hour. But there is another prayer dimension, intercessors regularly covering Cross Rhythms and its workers in prayer which brings into play one of the most unheralded yet vitally important ministries in the British Church, Birmingham-based Women Arise International Prayer Network. Rev Obii Pax-Harry was born in Nigeria but has lived in Britain for many years. As well as being the coordinator she is the director of Strategic Prayer School in Birmingham and Redditch and is also the pastor of a community church in Birmingham. Talking with Obii is an exhilarating experience, though journalists should be prepared for prophetic insights and words of knowledge which litter her conversation. For Obii is a powerfully anointed prophet and one who God has raised up specifically to do battle with the powers and principalities which grip this nation.

I began by asking Obii to explain a bit about Women Arise. "We are a community of worshippers and intercessors put together by divine ordination. We really operate on three levels, on a national level when we come together for large meetings, on a regional level - which is usually city-wide, and on a community level, where a small cell meets together for prayer. As well as all that we have cells internationally, in China, in Kenya and, by the end of the year, USA. We're committed to maintaining a canopy of prayer - like the Moravian Church who are renowned for keeping prayer going for a 100 year period!" Despite their name Women Arise is not a ministry exclusively for women. "There are as many men as women in some chapters," explained Obii. "It's for whoever feels a call to go deeper into prayer.

The roots of this extraordinary movement go back to 1993. By the mid '90s there were several Women Arise conferences. But then in 1998 God instructed Obii to lay down the mission to London and to relocate to Birmingham. Admitted Obii, "It was a difficult thing to do, beginning again in a new location, particularly as God spoke to me in a pretty unsettling vision - five men standing in a graveyard. But today Women Arise have five chapters in Birmingham."

Another God-given vision was formative in building a special relationship which today exists between Women Arise and Cross Rhythms. "I was at a meeting and the Lord spoke to me about a radio station called Perez. At the time I didn't have any idea what the word was about. The Lord had also given me a vision of some men with babies between their legs. There were trying to give birth but they had no strength. Then I met Jonathan Bellamy (Cross Rhythms general manager) and he told me how the Lord had spoken to him from Genesis 38 and how they were going to call the next Cross Rhythms festival Breakthrough (the actual meaning of the name Perez). From that time on a very close relationship developed between us."

Now Obii is burning with a vision for an event to take place in Birmingham in March 2005 called Sons Of The Commonwealth. Explained Obii, "There are 53 member countries of the Commonwealth. These nations were previously UK colonies. This conference will sound a trumpet call drawing back people many of whom have been distracted from fulfilling their God-given destiny in being a prophetic people. The darkness is getting darker in Britain. We are surrounded by strange gods and unclean spirits. It is time for the people living here from Australia, from Uganda, from Jamaica, from Pakistan, from all the Commonwealth nations to make a bold declaration of faith in the one true God. As I said, in the past many have got distracted, sometimes because they found hostility or even racism in Britain's churches. But it is time to put these things on one side and to work together in the spirit of unity. Pastor Agu Irukwu of RCCG is doing a wonderful job in London through the quarterly all night prayer meetings where 11,000 Christians, mostly Nigerians, gather to pray. How much more powerful it would be if these prayer meetings could represent all the nations living here. No Nigerian should be trying to establish a Nigerian church in the UK. No Australian should be doing such a thing. We must desist from reinforcing racial division by making statements such as 'the Nigerian Church'. What does the Bible say about ethnicity? Acts 17:26 says, 'And he made from one blood every nation of men to dwell on the face of the earth, and has determined thei preappointed time and the boundaries of their dwelling.' The Nigerians are in Britain on a 'British Commission' assigned from Heaven. It's time for Britain to embrace her children from the Commonwealth.

"In this nation of ours Islam is gaining ground while in Birmingham recently the Council here gave special honour to the Buddhist community. There is a desperate need for the Church to respond in righteousness to such things. My hope and prayer is that the Sons Of The Commonwealth event will be a significant step in changing attitudes within the Church and fostering real unity. Because it's only with a unified Church that this nation will see revival come."

I feel honoured and blessed for the opportunity and priviledge of hearing Pastor Obii Pax-Harry speak the word of God at the RCCG Province 4 Annual Women Arise Conference, held at the City of David parish on Saturday 27th Oct. 2012 in Lagos.

A woman of God was in the house, she prayed, she prophesied, she spoke, she worshipped and she declared and decreed... and everyone, Me especially was touched. Heaven came down.God bless you Ma.

May God continue to annoit you with fresh oil of gladness, favour and peace, and I pray that as I said Amen to the prayers of that day, may ALL that concerns me come to pass in Jesus' mighty name. Amen.

Hi
We came to a meeting of yours some time ago, during the week. We were uplifted be your praise and prayer time and we would be interested in any current meetings.
We consider that the Christian community is not fairly portrayed and represented in this city relative to other faiths.
Ken & Pat