Boyzone's Shane Lynch on Faith, The Occult and Becoming a Man

Visiting Stoke-on-Trent for VIP (a dinner for disadvantaged young people), Shane Lynch of Boyzone shares on his journey of faith, maturing into a man and the occult. Gemma Clemson caught up with him. 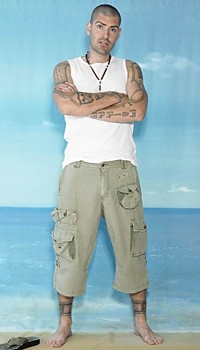 Gemma - Can you tell me a bit about what you are doing here at VIP today?

Shane - Basically I'm just here today to tell my story; My story pretty much goes from back when I was a child, through my school days, how I got into my first job and the journey through music really, and what that was like, for good and for bad. Also basically talking about whats the worth of money, and the value of money and stuff in everyday life, and in your inner-self life. And then going from that journey into bad times, to back out again, and to where I met Christ really.

Gemma - How did you get into Boyzone?

Shane - I got into Boyzone through pure chance to be honest. A friend of mine who I hadn't seen for a long time, who I used to go to school with, knocked on my door and to cut along story short he said 'Do you fancy being in a band?' And I said 'OK' really, thats kind of the beginings of Boyzone and how that all began. Obviously it didn't happen straight away; we didn't create the band over the next couple of days, it took a few months. We went through certain audition processes and management procedures were involved. All in all, it took about six months but that's how Boyzone was created.

Gemma - When you got into the band, how did you cope with all the fame, fortune and success? What was that like for you?

Shane - I was a young guy, 17 years old. I was still very immature in my ways. And I think one important thing is that age doesn't make you a man, your behaviour does. Some people think once they've reached a certain age they've become a man - No such thing! Behaviour, the way you act makes you a man, and through all my time with Boyzone I guess I was a child, in all that I did and a lot that I said. I guess it was a fantastic journey, and a learning opportunity - a life learning opportunity. And it was an amazing transition from boy to man at the end of it.

Gemma - What is it that made the change in you from being a boy to becoming a man?

Shane - The change from a boy to a man was responsibility. I lacked any kind of control or discipline. And what gave me control and discipline was God, and Christ, and Christ-like behaviour, because before that I was a law unto myself. There was no authority; I was my authority, and an immature man who holds his own authority realistically is a foolish man. I had nothing to look up to, and the transformation occurred when I came to Christ and realised how immature I was. And that's pretty much how I began to change my life.

Gemma - What or who is it that brought you to God?

Shane - There was many, many things over a long period of time, through many years which eventually led me to God. But I certainly took the wrong direction for a long period of time, where I went heavily into the occult, and searching for something. I had a lot of money; million pound houses, Porsches, Ferrari's - and all that kind of stuff that I had wasn't making me happy. So I was spending money trying to find happiness; trying to find happiness through partying, through nightclubs, through girls, all of those kinds of things. And momentarily that was there, but still the inner me was very empty until I came to Christ. And the happiness and the enormous void that got filled by God was completely different than what I experienced when I tried to achieve it through worldly possessions.

Gemma - So when you dabbled with Spiritualism what did you experience?

Shane - To be quite honest, some people misunderstand what the occult is. They think to be involved in the occult, or to be involved in witchcraft you have to be steeped in Druidism or something like that. But it starts very simply from Tarot readings, to fortune tellers, to clairvoyants, to any of the kinds of stuff which is in our playgrounds today. I say playgrounds to the point of where it is exposed to our children; you can go to a school fair, for example, and find a fortune teller there. Regardless of whether they are a real clairvoyant or not, you're still introducing the Devil to our children, especially with Harry Potter and all those kinds of things. I'm not against our children watching Harry Potter, providing you explain to them what the context is, in other words, this is witchcraft. Regardless of whether you think it is good or bad, it is witchcraft - it is bad and it is of the Devil. So if that is explained to your child, then I have no problem with children watching such things; if you don't, and you think it's all great that they are dressing up like wizards, that is still witchcraft and you have to be very careful what you dabble in.

Gemma - How long have you been a Christian for and how has it changed your life?

Shane - I've been a Christian now for pretty much four years, and it has changed my life immensely. I can't possibly explain to you. It has changed my views and how I would act in life which is very, very different. Again, it's about behaviour. I have put myself in a position where I now understand what's good and what's bad for me. Now as a man, I have to choose what's right and what's wrong for me. If I can't handle certain situations, for instance, if I go out clubbing at night and there's some very pretty women out there, if that's a temptation for me then I shouldn't be putting myself in those kinds of situations. That's maturity within Christ, and you have to be able to understand yourself as a person. It's those kinds of things that have changed my life.

Gemma - So why is it you're here tonight and what message do you want people to take away with them?

Shane - I've come here simply because I was invited. I'm not a preacher, I'm not about to tell people whether they're right or whether they are wrong, I'm only here to tell my story. If you can take something from that, then good luck. If you can't, then I'm sorry that you didn't. I'm here to tell people about a journey I went on, and it's a very positive journey in the eyes of Christ because that is what changed my life; That's what saved me as a person. I'm only here literally because somebody asked me to come here and hopefully it will be a very good night.

The opinions expressed in this article are not necessarily those held by Cross Rhythms. Any expressed views were accurate at the time of publishing but may or may not reflect the views of the individuals concerned at a later date.
About Gemma Clemson

Gemma lives in Stoke-on-Trent and is a student at the University of Chester studying media with a production specialism in radio.

View all articles by Gemma Clemson

Fantastic ! Praying ephesians 6 over all the boyzone guys on a tegular basis. The walk with Jesus is not always easy but always worth it. God Bless you guys xx

It is good to see someone who influences young people giving their testimony. Laying it out.
Unfortunately Shane suffers from the usual Christian attitude. Sorry but if you see Harry Potter as witchcraft, explaining it does not make it OK to watch it. These type of things need to be exposed not watched.
The Gospel of Jesus Christ is a 'NO COMPROMISE' gospel.

it's interesting to learn that Shane is a Christian; I've often found Boyzone's music to be very subtly, urm, Christian?
Song's like "Isn't it a wonder?" and "A different beat" are wonderful, and remind me that God is loving.
And that there's a world out there; one that we've got to fight to change while acknowledging that we will ultimately fail.
Also, they remind me that God's there.

Thank you Lord for Boyzone!

thank you shane and keep up the good work

gemma is a wonderful interviewer, and asked great questions!

Good to hear Shane laying it all out so honestly. Refreshing :)

Hiya,
Just want to say very good interview and that it sounds like Mr. Lynch is becoming a wise/mature man, in learning from the past!
God bless & keep up the good work!!!
Question: why do I have to type a word in the box below the comment box???