Bringing Christianity To Life At The Israel Museum

Paul Calvert spoke with Dudi Mevorach from the Israel Museum, about the development of Christianity in the Holy Land. 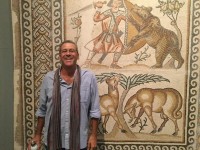 Paul: We are walking east from the amazing Second Temple model. Tell us a little bit about this Dudi.

Dudi: When we decided to place the model of Jerusalem here, which is west of the Shrine of the Book, (which houses the Dead Sea Scrolls), we realised that it is the path that the people who wrote the scrolls took, when they decided to escape to the desert.

They left Jerusalem and walked eastwards to Qumran and took refuge there. So we have decided to draw a path, or a tunnel, leading from Jerusalem to the Shrine of the Book, that walks the same direction into the Judean desert, towards the Dead Sea and eventually reaching the Dead Sea Scrolls.

Paul: We are walking through the Museum and a section focuses on the history of Christianity. Tell us about where we are now.

Dudi: We have noticed that many of the visitors that come to the Museum go to the Shrine of the Book. They see the model of Jerusalem; they sometimes come in to see exhibitions; but most of them are unaware of the fact that hugely important artefacts that point to the very beginnings of Christianity in the Holy Land, are exhibited here in the gallery.

So we have pointed out 10 stops like this within the permanent galleries, that connect directly the story to the landscape, and to these crucial historical moments in the development of Christianity here in the Holy Land.

One of them is the Temple Mount and the Temple in Jerusalem. Also two of the most important finds coming from the Temple Mount that was destroyed by the Romans in 70 AD, at the end of the great Jewish revolt, are exhibited here.

One of them is a fragment of an inscription in Greek, which is a part of the parapet that divided the Temple Mount into where everyone could have gone, and to the surroundings of the Temple where only Jews could cross and go in into the ritual of the Temple.

The inscription itself is in Greek so everyone could read it. This was the international language at this time. It's that whoever crosses this line and is not a Jew, or was not purified, is sentenced to death by the high priest.

It is the only instance where the high priest can sentence someone to death, because the country functions under Roman rule and only the Roman Procurator can sentence someone to death, as we very well know from the story of Jesus' trial and crucifixion. But in this instance, if someone crosses this border there is no need for a Roman trial. We know a few cases like that. 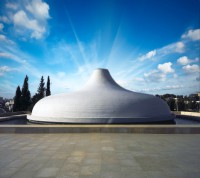 The Shrine of the Book at the Israel Museum, Jerusalem

Paul: So this is something that Jesus would have seen?

The other inscription next to it is in Hebrew. It's also from the Temple Mount. It's actually a notice for the priest, saying where to stand and blow the trumpet. It says "To the house of trumpeting to announce."