Nearly 1,200 people packed into Coventry Cathedral recently for what turned out to be a significant night as Hope08 was officially launched in the city. Steve Chalke, well-known author, TV/radio presenter, speaker and founder of social action charity The Oasis Trust, spoke about the need to reach our communities as never before with the love of God, whilst the celebration service, the biggest of its kind at the Cathedral for years, was an opportunity for churches of all denominations across Coventry and Warwickshire to come together for the launch of the HOPE08 campaign in the city.

A national initiative, HOPE08 aims to bring churches together to work with partner agencies and local authorities to reach communities across our cities to meet people's needs, spirit, soul and body. Many church leaders from across Coventry have already expressed an interest in working together during 2008 and have begun praying over project plans. Coventry City Mission and Coventry Cathedral are already the official local partners. 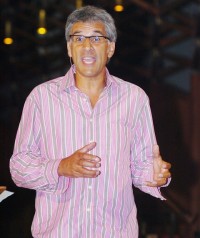 Parmjit Dhanda MP - Cohesion Minister at the Department for Communities and Local Government says, "I consider HOPE08 to be a valued partner of Government and a true example of what can be accomplished when we all work together towards a shared goal. The values and traditions which motivate those of a Christian faith to serve their fellow citizens are clearly evident in the themes of HOPE08".

The city-wide celebration included worship led by Sandra Godley, Events and Conference Manager for Coventry Cathedral. A presentation was then given by the Hope08 Steering group for Coventry, led by Mission Facilitator, Rebecca Neely, in which resources were made available to support the church, including vinyl Hope08 church banners, the launch of the local website, the Hope08 Great Ideas book, and a training day for church leaders.

Tim Coleman, media and publicity officer for the campaign in Coventry then announced the imminent launch of Radio Hope, a 10-day radio station in partnership with Cross Rhythms, due on air in the city from Wednesday 31st October to Friday 9th November. Tim says, "It's an exciting time for the church in Coventry at the moment with a real desire by all denominations to come together in unity as never before to do more, do it together and in word and action as we reach new people with the gospel message and the love of Jesus. This reflects the national aims of HOPE08 and the sense that God is doing something new in the U.K to build His Kingdom. 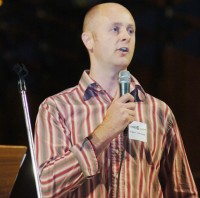 I'm excited by the prospect of setting up Radio Hope to give the people of Coventry genuinely good news and to bring together church leaders and local authorities as new ideas are birthed to share with people the message of the Christian faith."

In 2008 Radio Hope will also run a full 30 day license, which will in turn hopefully sow the seeds for the application of a permanent Cross Rhythms Coventry community radio license, to compliment those already established in Stoke-on-Trent and Plymouth and due on air next year in Teesside.

After another time of worship, led by the Barachah Faith Choir, Steve Chalke inspired the congregation with his words of encouragement and challenge to the collective church to come together as never before to make an impact on our cities and nation.

Steve was ordained as a Baptist Minister in 1981, having studied at Spurgeon's Theological College in London, and was a local minister for four years before setting up the Oasis Trust. Oasis now has over 400 staff, students and volunteers, pioneering educational, healthcare and housing initiatives in the UK and across the globe. In 2001 Steve laid the foundations for the Faithworks movement, which works towards empowering and inspiring individual Christians and every local church to develop their role at the hub of their community. Steve was awarded an MBE in the New Year's Honours List in 2004 for his services to social inclusion.

There's no doubt that Hope08 has already captured the hearts and minds of both church leaders and Christians across Coventry and Warwickshire and with plenty of preparation and prayer going on at the moment and with the momentum gained from the Coventry Praise night and the imminent Radio Hope, there is a genuine anticipation that indeed Hope will truly emerge and increase across the city of Coventry in 2008.

The opinions expressed in this article are not necessarily those held by Cross Rhythms. Any expressed views were accurate at the time of publishing but may or may not reflect the views of the individuals concerned at a later date.
About Tim Coleman

Tim began his broadcasting career in 1990. He was a producer on the first independently produced drama serial for BBC radio called the Colcloughs. With a degree in Agriculture, the next somewhat predictable move was to The Archers on BBC Radio 4 at Pebble Mill in Birmingham. Tim went freelance in 1994 and worked as a journalist, producer and presenter across many BBC radio programmes and particularly the farming output from Pebble Mill. After becoming a Christian in 1997, Tim managed a Christian radio station in Zambia. After returning to marry Sarah in 1999 and a short time spent producing humanitarian programmes in post-war Kosovo, Tim and Sarah settled in Redditch, where Tim returned to the BBC as a journalist. It wasnât long though before itchy feet took Tim and Sarah to Nigeria where Tim worked for the BBC World Service but a call from God into media ministry and a vision for Christian Community Radio in the U.K saw him return home in 2005, after which he contacted Cross Rhythms and joined as presenter for the mid morning show Community Choice. Tim is now hoping to plant a Cross Rhythms community radio station in Coventry, the city in which he has settled with Sarah.

View all articles by Tim Coleman