Jeff Short chats to historian Dr Tim Dowley about his new book which tells ten stories of extraordinary women and men who lived during the Holocaust as we celebrate the 75th anniversary of the liberation of Auschwitz. 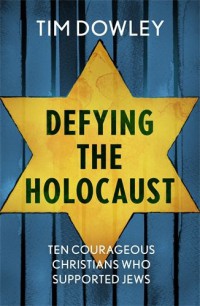 Jeff: I know you've written serious books, biographies as well, but this book, Defying the Holocaust, which coincides with Holocaust Memorial Day, what prompted you to write it?

Tim: It's quite personal really. My wife's mother is Jewish. She was a little girl of 4 in Prague when the Germans occupied Czechoslovakia. She managed to get out at the last minute. First they went to Genoa and then Paris which wasn't a great move because the Nazis went there. They met up with their father who had got out before that, they bought a lorry and drove down to the south of France. They managed to survive the whole war there in various ways. First they went to a little village in the Dordogne where the mayor was friendly and they found a flat to live in until somebody denounced them. They escaped that and had various adventures but in the last part of the war they got to Grenoble in the French Alps and a Christian man who was involved in the Resistance helped them. He found them somewhere to live, he gave them false ID, false papers. He let them know when raids were happening. It was through that Christian man and his bravery that they finally survived the war. I wanted to find out more about this so my own children would know what had happened to their family way back so I wrote that. Finding out so much, that I thought there must be other people like this - unsung heroes.

Jeff: My only experience is a family on Jersey and seeing how those people lived under these extreme conditions and how prisoners were treated; there were a lot of Russians there. But for you, with that personal insight, I can understand what would prompt you to go deeper. Would you tell the listeners a bit about the book?

Tim: It prompted me to think there must be others like this. I'm an historian by background so I started researching. What I've done in the book is to tell the stories of ten different people, individuals, ordinary people for the most part, from different countries, different churches - Quakers, Anglicans, Russian Orthodox. When they saw Jewish people at risk, in danger they stood up and did something to help. They found them somewhere to hide, they brought them food. And often they stood out against their own church. One of the stories takes place in Vienna, where antisemitism was particularly strong. The chaplain at the British Embassy there started giving Jewish people baptismal certificates because if they had a baptismal certificate they could show that when they asked for a visa to try and get away from Nazi occupied Austria. Without that they wouldn't have been able to get a visa. Although what he did was salvation for a lot of people the church authorities in the end quite quickly pulled him out because they didn't like what he was doing. They thought it was more important that the church's strict rules would be followed.

Jeff: It's bizarre. You would think that the church authorities, the church collective would recognise the work that was being done. There's someone in the book that maybe people have heard of - Hugh O'Flaherty. He was the subject of the film The Scarlet and the Black. He didn't wait to get permission from the church; eventually the Vatican became a haven and the Irish Embassy. I find it's a lovely balance. You've got people like Corrie ten Boom and Hugh O'Flaherty that people may have heard of but how did you happen upon these other stories?

Tim: Just working away. You follow leads. I got deep into the literature and gradually found people. There's an extraordinary story of a Scotswoman who was the matron of a Jewish girls boarding school run by the Church of Scotland in Hungary. She's quite exceptional in that the rest of the staff left when the Germans invaded. She had a blazing row with the Superintendent and said I've got to remain with my girls. And she paid for it with her life. She was taken to Auschwitz and died there in the gas chamber, as far as we know.

Jeff: It strikes me that they don't all have happy endings. They're not all Corrie ten Boom or Hugh O'Flaherty. Some of these people paid the ultimate price.

Tim: Absolutely. There's another example, a woman called Mother Maria. She belonged to the Russian aristocracy. She got out of Russia and became a Russian Orthodox nun. She was imprisoned in RavensbrÃ¼ck for helping Jews. She paid with her life. Like Corrie, she was a beacon of hope to prisoners while she was in RavensbrÃ¼ck. She led prayers in the evening after they'd been working all day.

Jeff: There's a chapter about the midwife in Auschwitz.

Tim: She was practising as a midwife in Poland. She'd been taking food into Jewish people in the ghetto and was imprisoned for that. When she was taken to the death camp they discovered she was a midwife so they said you've got to use your skills here, which she did. But she was faced with the fact that nurses there, completely against everything in the medical code, were drowning them as soon as they were born. She had the guts to stand up to Josef Mengele, the infamous medic, and said I won't do that. I'll deliver the babies but I'm not going to kill them. It's against my Christian conscience. Somehow she survived.

Jeff: She delivered around 3,000 babies in a death camp. I can't imagine being in there but being in there to stand up against someone like Josef Mengele is quite extraordinary. It seems antisemitism is something that never goes away. Do you think the stories that you are telling are inspirational because it's a timeless message of standing up against oppression and antisemitism?

Tim: I think it is. We've got to never forget it. Sadly, the people that survived are coming to the end of their lives so we've got to go on telling these stories. This is history. I've been very careful in this book not to exaggerate, to get the facts as straight as I can, not to embroider it, which I think sometimes, can happen. If that happens there's a danger that people start calling it fake news. It's not fake news; it's something that happened and we cannot afford to forget it because as you say antisemitism is on the rise yet again.

Jeff: That is one of the things that has endeared your book to me the fact that these are stories that you could verify. Any time we exaggerate it calls the whole thing into question then we get the Holocaust deniers. How has the book been received?

Tim: Very well, so far. I've written introductions in a number of magazines. It seems to be building very well, thank you.

Jeff: I hope you get the opportunity to tell many other people because it's a wonderful book. It gives ordinary people hope; it gives you the courage that David had to face Goliath.