Discovering The History Of The Early Church

Paul Calvert speaks to Father Eugene Aliatta from the Terra Sancta museum in Jerusalem, about the archaeology that uncovered the artefacts from Jesus' time and the early Church, as well as their connection with the Franciscans. 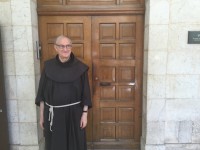 (Copyright on all photos is @NevaGasparo)

Paul: What is this museum about?

Father Eugene: Via Dolorosa is the way from the place of the judgement of Jesus by Pontius Pilate, to the hill of Calvary where Jesus died. There is a traditional way, it is difficult from an historical point of view to be sure for every step of Jesus, but tradition has kept the memory and we follow that tradition.

Paul: So the location where you are at would actually be the place where Jesus was condemned to death?

Father Eugene: Historically this can be discussed like many other things, but we are used to following traditions in the Holy Land. Tradition sometimes is very strong, sometimes it is not, but we follow the tradition at all times.

Paul: When was the museum started and why?

Father Eugene: The idea to make a museum was before the project of the Via Dolorosa Museum. There is a general desire in people living in the Holy Land to collect memories and to understand the significance of these memories.

Franciscans have lived in the Holy Land at least 800 years. They started to collect memories and study them, and we were the Franciscan museum in the main Franciscan monastery in Jerusalem.

Recently we did a specialised section of this museum, which is dedicated to the daily life in the time of Jesus and New Testament times, which is a little bit more than the times of Jesus. It comprises also the times of the apostles and the early Church. This part was the first to be prepared.

Paul: You have many different artefacts, where have they all come from?