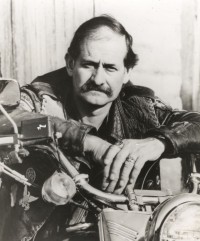 The Edge said something a few years ago which applies to the dance music scene. He said that the unification of Europe was not going to mean that those countries would get out of the zoo - if they didn't t solve their problems first. They were just going to end up with a bigger zoo. That comment hasn't got much to do with music. And it sounds like it s a message for the establishment. But I think it s also a message for alternative cultures.

Just because we get together and take e and dance all night - and feel as if somehow we've been able to get out of the crap of the rest of our world - doesn't t mean we re any less in the zoo of society. We might think we've cut loose, but we re actually still as much a mindless product of the society we reject. I know that in the loneliness of our individualistic culture dance music is a togetherness thing. But it may be that we've walked together out of one forest, mainstream society, and into another forest.

I see the dance music scene - and many alternative cultures - as a bit like being lost in a forest. If you drop someone in the middle of a forest then, even if they know where the boundaries of the forest are, they don t get lost by walking long distances, they get lost by doing repetitive circles around an ever smaller circle. It s like that with the dance scene. If you live just to dance every night it s an extremely small circle and in the end it s not going to satisfy. If we look at the nightclub scene as a globally liberating statement of youth existence, I've got to say, you've got to be kidding. Is it a path out of the forest, the mainstream society we reject? Or are we spinning around in small circles, lost in the middle of it, but because there are a few of us together the community thing deceives us into believing that everything is going to be alright?'

There is a verse in the Bible where Jesus says, I am the way. He s saying that through him there is a path out of the forest. You don t have to just endlessly circle around in a small group of mutually lost friends. And that path is very straight forward. It simply says that there is a meaning and purpose behind the universe after all. There is someone who loves us and we can make contact with that One. That One is actually vitally interested in us and seeks to reveal that interest to us and the best revelation of that One is Jesus.

Jesus says you can know God; the source behind every energy that your nerve ends long for; everything that is expressed in the creativity of techno music, everything that is felt in that tremendous sense of what it s like to not be on your own. Out of that comes another thing: you can love others. That s not just those others running around in the circle you may be in, but whomever in the world scheme of things actually needs you. You can love others as much as yourself.

And is the dance music scene really any more loving? Do men really treat women in the nightclub with deep respect? If you are a girl do you know you are safe at a dance club and are not going to get a predator that s going to lay you for the night because he wants to screw something that looks pretty? And then drop you if you happen to make a deep connection with him and you want to go on with a relationship?