Kerry: I was extremely shy and my actual opinion about what I felt about things was deeply hidden away. It was so refreshing to meet someone like Chris, who was so open and honest. I could hear the truth in him from the very first moment I heard him talk. I could hear that he was authentic and genuine and real. And because he was so vulnerable about what he had gone through, I felt totally safe to start to tell him everything about me - eventually. One example was something that had happened when I was a very young child, pre-school, and I had always felt a conviction about this. It seems quite a little thing now but I really wanted to get it out and one night I said "Chris there's something I need to tell you about me" and I couldn't get it out. I was like this little guilty four-year-old child. And after ages I managed to say it and Chris burst out laughing and said "was that all it was". And I burst into tears because I had carried this for sixteen years or so. It was just so freeing. I think it was the security of knowing that Chris loved Jesus, I was endeavouring to find and love Jesus, and that it was safe to be real within that. There's that scripture, "confess your sins one to another, pray and I will heal you". Confession, in the safety of love, not fear, is so beautiful and liberating.

Jon: Anything you want to add Chris about the journey of honesty, transparency?

Chris: I would just say that where Jesus says "I am the way, the truth, and the life, no one comes to the Father except through me" there is a process for us to mature into. I think, for those of us who've experienced a journey of faith, we know that Jesus is definitely the way. But understanding that he is the truth is a little bit like Pontius Pilate standing before Jesus, who is the absolute truth, and saying "what is truth?" In the church I think we need to recognise, in the days that we live in, that each person's truth is real but relative to their own experience. So our truth, which is real to each individual, still needs to be aligned to the absolute truth. That is the process of getting to the Father via Jesus who is the way, the truth and the life. In his holiness and his incredible love, God deals in that truth. The challenge of faith is that dialogue where our conscience is really important in helping direct us to truth.

Chris & Kerry in the CR Studio

Kerry: So the importance of this principle for me, in being able to share something about myself from when I was four years old, was that I was facing a model of how I had started to hide things. Although it might seem ridiculous sharing with Chris, something quite small, from so far back, it wasn't. It was remodelling how I would feel with authority - with an authority figure, about my issues. And I was being freed to come to God as my Father in transparency and truth.

Jon: Kerry, can you explain how you spell LOVE? And what you've learnt about that?

Kerry: (Laughs) Yes, you're referring to a time when Chris and I went out into the park in the early hours. We'd been married less than a year and Chris said to me "Kerry, how do you spell love? And I said, rather brashly L.O.V.E.! And he replied "No Kerry. It's G.I.V.E.!" That is the whole point of Gotta Die to Live. It's a story of transformation, dying to our selfish core. It is so vital in letting Christ live in us, letting him rule and reign and be the one sitting on the throne. I believe love is so misrepresented and misunderstood in our culture. The best definition of love is found in 1 Corinthians 13:4-8 where the true attributes of love are described. It is, amongst other things, patient, kind and not self-seeking. 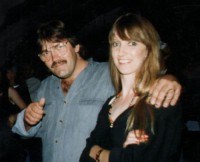 Chris & Kerry in the early years

Jon: Chris, could you remind people of a couple of the foundational words that God gave you in those early days? I was interested not just in those words that you were given but also why you think God gives those words at such a time in your life? Your whole world was breaking down and being rebuilt but right at that point God is also wanting to say "this is what is in my heart for you".

Chris: In February 1982 one of the mentors of the FGBMFI, Dr. Fred Ladenius, gave me a word. I didn't even know what a prophetic word was but he said "you are going to be used to reach thousands no, millions for Christ, through media". The prophetic is very important because it is intentional for our faith journey and our warfare. The moment we get a prophetic word it's like you are moving somewhere in the spiritual realm. For me, the prophetic word was important for two reasons: (a) Although God wanted to do something through us - even more important to Kerry and me, and I think this comes through really well the book, is what he does in us in the process. But without the intentional prophetic direction on a personal level, you can go all over the place. I think the prophetic is extremely important to hold on to because it's given by God to confirm a call. But for me the prophetic is the most important gift - as the Apostle Paul says, because it's so directional. I think Kerry and I now, forty years later, can actually say "you know what, that gift from God that prophetic word for us, was so intentional to bring us to where we are today". In all of the battles, in all of the challenges, the prophetic call has got to be built on a radical discipleship. You can have a prophetic word and not have the character or integrity or good conscience before God and man to appropriate it.

Kerry: For me this is the importance of Gotta Die to Lives subtitle 'an outer trip and an inner journey.' You can follow the prophetic and achieve something and have built something but have you been transformed in the process? I think that is what is vital and is demonstrated in the book.

Jon: That word that you mention in the book about thousands no millions to Christ through media, that foundational word would be the beginning of the journey that God would take you on in media. Where would you say Cross Rhythms began on this journey?

The decks that started Cross Rhythms

Chris: I think the reaching of thousands no millions began when Kerry's grandmother gave us a substantial gift back then of Â£250. I bought a disco deck and with 25 albums from a friend, Steve Wheeler, I did a presentation to the local radio station, Plymouth Sound. Kerry documents it in the book, and out of that came The Solid Rock of Jesus Christ radio show. On a personal level though, the inspiration of using music to carry the gospel message came when the Holy Spirit used the message of the lyrics from Bob Dylan's 'You've Got to Serve Somebody' to powerfully touch my heart. That was profound. Before I got saved I was deejaying; I had had some success in Brussels back in the '70s. I've always deejayed so I can imagine back then God said "well, he's a deejay, I'm going to use him in that way". That was the seed of God's call on my life and we saw it grow. Kerry documents in the book the profound miracles of even getting the show on Plymouth Sound. Back then contemporary Christian music was not part of church culture. So it started slowly. Kerry has done a very faithful account of explaining how Cross Rhythms developed within the emergence of the media vehicle that God gave us. She shares how the community of that vehicle then grew; meeting Tony Cummings and Alan Barker, the way the whole thing grew, yourself, Ian. The real excitement now Jon, I have to say, is what you and Heather are doing with xRhythms. I just know in the eternal God's taking that on into something really brilliant. 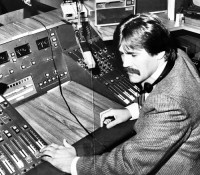 Jon: Let me ask one more question about the media journey. I didn't want to unpack the journey of Cross Rhythms, UCB, God TV but just to say that following that word of 'thousands, no millions' God opened up incredible opportunities throughout those years working within or birthing media ministries. When you look back on that and look at where you are now, where do you feel you're at in relation to that original word and what's in your heart going forward, when it comes to media?

Chris: So when we started out we were breaking new ground, pioneering into unknown territory, sensitively following the nudges of his Spirit, walking through the doors he was opening, taking hold of the opportunities that were unfolding before us. As a result, much has been birthed, developed and established through His leading and it has taken commitment to remain faithful to the call. Kerry and I are in a place now where we feel very settled in heart and spirit as to where God is taking us, so I think going forward, we are really at peace and we want to see those who are starting out, and those who are already influential in their call, prosper, and for the kingdom to continue to come for them in the media. Today, it's not just about the big platforms of TV and radio. It's more about the dispersal into social media. And with regards to what is in my heart, let me be vulnerable: I've been praying to the Lord for resources for where we can sensitively promote on media, stories of the church from countries around the world where to be a disciple of Christ really is quite challenging. I believe their testimonies would influence and encourage our church in the west because God's global view is not just western!

Kerry: I think in a nutshell there's a real sense of us having realised much fulfilment of that word, yet there is still much increase to come. Although we have seen the golden thread of that word all the way through the journey, it's ever expanding and multiplying. The seeds are scattered out there to propagate and grow. There are all sorts of other parts and facets to what has developed over the years in many different areas. So there's a beautiful sense of freedom and release and excitement over the shape of what that looks like for the future.

Jon: Let me come back to two of your stories, Kerry. Tell me about the time you met an angel.