Kerry: Chris and I had just had our first baby, Ruhamah. She was six weeks old. I'd been given a big, cumbersome pram and was just getting to grips with using it. I'd had a caesarean delivery, and so after the six weeks recovery I'd gone out with the pram for the first time. I was with a friend and we walked to a main thoroughfare to do some shopping. We went into a store for a food shop and I put some bags into the bottom of the pram. As we walked along, my friend drew my attention to something in another shop window and as we stopped and looked, I momentarily let go of the handle of the pram. I assumed it would stay put but it didn't! As I turned back towards the pram it was literally inches from rolling off the curb into oncoming traffic. I knew at that moment there was no one anywhere near the pram. As I lunged towards it, suddenly there was someone there, blocking it from falling off the kerb. It was a tall man in a brown coat. I looked at him and said 'Praise the Lord!' And his answer shocked me because he replied gently 'Yes, indeed.' I instantly knew that he knew who I was praising. I turned to my friend to express my relief and when I turned back a few seconds later he just wasn't there anymore. I looked around but there was no one there. Holding the pram, I walked home with my friend. I felt terrible and all the time was trying to reprimand myself but when I did, this sense of gratitude and peace would sweep over me. When we got back to the office and home at Cornerstone, Chris and the team were in prayer. We went inside and I told them what had happened. One of the guys said, 'Kerry, I believe you have just encountered an angel.' What he said totally fitted with what we had just experienced and everything in me agreed that this was the correct explanation of what had just happened. I went on to share the story on the BBC Songs of Praise.

Jon: I guess the words you heard him say, "Yes, indeed", mean yes, Father was looking out for Ruhamah and yourself to protect her from what could have happened if that pram had gone into the road. You have another daughter, Sarah, who has faced a different peril, walking through cancer. Can you tell us about that journey and where Father was with you in that?

Kerry: I actually believe the words 'yes, indeed' expressed this glorious unified moment of our mutual acknowledgement of who we were both praising. It was much deeper than the incident itself, it was about where the praise and thanksgiving for the protection was directed and to whom. Which leads into the very real sense of God's presence with us as a family when our second child was diagnosed with thyroid cancer. We were so aware of his love, care, guidance and comfort despite walking through this very dark valley. I call these times 'walking with God when the sky turns black.' It always makes me feel very sad when people walk away from God in times of difficulty, because for me, that is when you hold your best friend's hand even tighter. I share quite a bit of the journey that we went on with Sarah in Gotta Die to Live. God got us through. It was a very painful, really focussed time. The most important thing to me as a mother, was knowing that Sarah knew and loved Jesus. I was convinced, and I am convinced, that the door of death is just a door. When we've accepted Christ into our lives we're already in eternal life and so it's just a door that we step through. Our confidence was in Jesus and we sensed him very close in our suffering.

Jon: In the book and in your life you've had loads of experiences on the journey of God's healing and discipling. Where do you feel you are today in that journey?

Kerry: That's a beautiful question and I can answer it so simply. I believe that I have arrived safely in an understanding of God as my Father. I'm in that place, there's no moving me. Of course there is much to deepen, broaden and discover but I feel overjoyed to have come home to God. It's been a long journey, very painful in many ways. Especially for a woman, when you think of what happened with Eve, when God said that the curse will be that "your desire will be for your husband and he will rule over you", the whole process for a woman to come into total freedom is for that curse to be broken, for us to get back to 'the garden' - an intimate relationship with God. I think the biggest idol in my life was subtle because it mirrored the genuine need of being seen and loved and heard - that affirmation that all of us long for, but my focus was misdirected. My longing was that it came through my husband - albeit from a very godly man who loved God and was a disciple. Chris has been such an amazing person in my life but he should never take the place of God. What God showed me was "no, that was a wrong yoke and I should never have looked to Chris for that". When I came into a revelation of that and asked God to forgive me for that yoke of slavery I'd been under - where Chris's opinion mattered so much to me, I was brought back to the Father, safely with him, and only desiring that his love is manifest through me. This answer probably doesn't make full sense outside of the context of the 40 year journey Chris and I have been on. 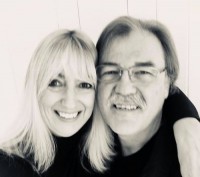 Jon: Final question for you Chris, as that Dad, looking at the next generation coming through: what would you want to say to that generation? If you look from your own experience of those early days and the cost of surrendering to Christ right at the beginning and then the journey that God's led you on, what would you say to those who are just starting out on their journey?

Chris: It has genuinely all been worth giving everything to God. Right from the start. He has proven His faithfulness as Kerry describes in the book. I would say to the next generation coming through 'stay faithful and God will prove His father's heart to you in this life and the next. He has blessed you and invested in you great gifting that He wants you to fully use for His sake. The destination of our faith is the face of our Father. When we seek His kingdom first, everything else comes - it makes sense of everything in the good and the tough times. As the apostle Paul says, "I've learnt the secret of being content in every situation whether abased or abound."

Gotta Die To Live - An outer trip...an inner journey, is out now.