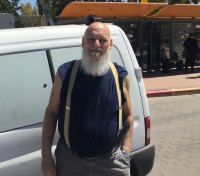 Paul: Stuart, what is Hope for Sderot?

Stuart: It's a humanitarian aid organisation and we're dedicated to helping the victims of terror, here in Sderot.

Stuart: The best way I can explain it is, it was a God thing. It was a calling that brought me here because nobody would want to come to Sderot, if they were in their right mind. It's something I felt I needed to do and it's been almost ten years ago now.

Paul: What is life like living here in Sderot?

Stuart: First of all, I love Sderot. I couldn't be happier here. The people are unique; they're real. The things that are important to them are family and friends. Material things aren't high on the list. The hardest thing obviously is the constant threat and the seven, eight thousand kassams we received in the last 10, 12 years.

Paul: These are rockets coming over from Gaza and landing in Sderot?

Stuart: Absolutely. There have been thirty people killed here in Sderot; numerous injuries, property damage in millions of shekels. Sderot is known now as 'bomb shelter capital of the world' because they've built a bomb shelter on every house, so you have some place to go to hide; and we're known as the rocket capital of the world - 'rocket city' actually - because of all the kassams.

Paul: How many rockets can you get in a day?

Stuart: We have gotten as many as 60 in one day, and that was in the days before we had bomb shelters so you were constantly running somewhere to hide. It was unbelievable.

Paul: You could move to Jerusalem, so why do you live here so close to the rocket fire?

Stuart: This is where God wants me so that's why I'm here. But you have to remember today, there's no safe place. Even just a couple of weeks ago they sent a rocket to Tel Aviv. During the last war they sent rockets to Jerusalem. You either get it from the north or the south so it doesn't really make any difference where you live.

Paul: How does it feel for the children who live here?

Stuart: Consider this: every child of 17 years or younger does not know what it is like to live without the threat of a rocket falling in your living room, in your bedroom, in your school playground. They say that we all suffer from post-traumatic stress disorder and I disagree with them. We all suffer from accumulative traumatic stress disorder because there's nothing 'post' about it. It's been an ongoing threat since 2001 when they started firing the rockets and it's never stopped. There may be lulls; there may be times when it's quiet but if you hear a boom, a bang, the slamming of a door, a dog barking and you live on the edge of your seat because you never know when the next one's coming.