Hope In The Midst Of Persecution In The Middle East

Paul Calvert spoke with Yvette Isaac from Roads of Success, about their work to empower, educate and act as advocates for persecuted Christians in the Middle East. 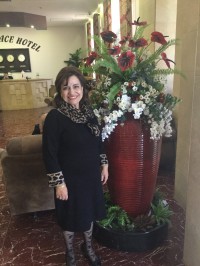 Paul: What is Roads of Success?

Yvette: Roads of Success is a non-profit organisation with a heart for persecuted women in the Middle East, and for Christians and minorities of the Middle East. Where there is war, they are the first ones to pay the highest price.

We have four programmes to help them out. The first one is empowerment. They need to be empowered, to feel loved, and to feel like there is hope for tomorrow. So we have Empowerment Education Plans, like Healing from Trauma.

Also we help them with a television show, which airs all over the Middle East and all over the world for Arabic speaking people, for women, children and for families.

Paul: What is your mission?

Yvette: Our mission is to reach out to the persecuted peoples through media, education, and advocacy and also through humanitarian aid.

Paul: Is persecution of Christians on the rise?

Unfortunately the world doesn't know about Christian Middle Eastern. When you mention the word Middle Eastern, they think there is no Christian in the Middle East, and it's all terrorists, but this is not the truth.

I have a story to share with you. I met an 11 year-old in Syria. He lost his twin brother in a school bombing and he got wounded himself. When I met him I said, "Why don't you leave? You are very qualified to leave Syria and to live in a safer place." He looked at me as if I don't understand the situation and said, "That is where Christianity started and we intended not to leave, because if the Christian will leave the Middle East, this will be the throne of Satan and the whole world will not have peace. So we chose to stand for the Christian in the world."

Paul: Are we losing Christians in the Middle East?

Yvette: Definitely we are losing them, because they feel like nobody hears them, nobody cares for them, and nobody knows what they have been through.

Paul: What is fuelling this?