Israel And The International Community

Daniel Seaman is the Deputy Director General for Information at the Israeli Ministry of Public Diplomacy and Diaspora Affairs. He is one of the foremost experts on the foreign press coverage of the Arab-Israeli conflict and Paul Calvert spent some time with him hearing his thoughts on the ongoing conflict with the Palestinian people, bias in the press and the growing threat of a nuclear armed Iran.

Paul: What is the Ministry of Public Diplomacy and Diaspora Affairs?

Daniel: It's the Ministry that handles the Public Diplomacy; the image or projecting the image of Israel and presenting the State of Israel to the international community.

The Diaspora Affairs aspect is another element, which deals with the Jewish communities around the world, on the public diplomacy level, but mostly on the mutual interests of Israel and the Jewish people.

Paul: How is Israel seen around the world?

Daniel: Well you'll have to tell me.

Very plainly, the way Israel is presented or the way people receive the information is biased on how the international media covers it. For a very long time the international media had been concentrating - I would say disproportionately - on what is happening here, compared with what is happening in other places around the world. There were more foreign media stations in Israel over the past 30 almost 40 years than any place else in the world covering it most intensively.

The international media has also concentrated on perhaps one aspect or mostly on one aspect and that is the Palestinian/Israeli issue. Some people call it conflict; I don't accept the word conflict because there is no conflict here. There is one side; the Palestinians who have constantly not accepted Israel's right to exist. It has been said before if the Palestinians and the Arabs lay down their weapons we will have peace. If Israel lays down its weapons there will be a massacre. If the other side is willing to accept our existence then there will be no conflict.

The media concentrates on this one aspect or perspective, i.e. Israel being victorious in the attempts to destroy it. However we have been controlling a significant Palestinian population because of the circumstances, not because of Israel's desire to occupy them; but because of the fact that the Arab countries have assaulted Israel in not accepting Israel's existence here. The perspective is of Israel being the occupier and the Palestinians have been very good at using the terminology of human rights etc against Israel under the circumstances. When journalists or the media can't give a broader perspective of things, what you hear on a daily basis is the negativity; the Israeli occupation; the Palestinians under occupation and people don't really go into all the details. 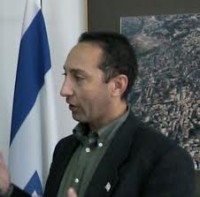 Other aspects of Israel, other things that represent the true face of Israel, do not get enough time and therefore you have a perception of Israel being a very tough country. The BBC conducted a poll about Israel undermining stability in the world, but when you know a little more about the State of Israel you see it's a small country that has given tremendous contributions to human kind only these things don't receive media exposure.

Paul: Do you think there is a lot of miss-information about the history of the land?

Daniel: Absolutely. There is tremendous miss-information and also deliberate miss-conceptions and an abuse of historical facts. It's been 64 years since the establishment of the State of Israel and people don't know about the background. Based on the little they hear from the media the people have a perception that Israel sort of took away a State that existed here among the Palestinians and destroyed their nation.

There was no Palestinian nation before 1964. When you look back 64 years ago with the decision of the United Nations to create two States in this region, one was a Palestinian State basically for the Jews. The Jews were considered the Palestinians, whereas the Arab State was the other side. Those who call themselves Palestinians today, 64 years ago were part of the Arab collective.