Described as the 'Cbeebies of the faith community', The Little Worship Company has created brilliant, inspiring media to help children discover God and to encourage a global audience of faith-filled little humans. 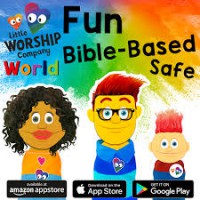 LWC: Our first project under Wonderborn Studios has been the Little Worship Company, which is an absolutely incredible series for 0 to 7 year olds. It's worship based.

It's presented by a family of puppets called the Lujahs and they lead you through the story line of the worship music. Hal, the boy, is designed to absorb information and help the young viewers to understand more about God.

Along with it there are some devotionals, the curriculum and an absolutely brilliant app that's been made by a team of people who led Club Penguin and Bing and other things like that. So it's a really exciting project.

Jeff: As you say, there seems such a gap. I saw some figures that there has been only a very small amount of Christian programs for children in the recent past. You also said they were high quality and your background is with some pretty impressive groups.

LWC: Me personally, I've worked on Ray Mears and Comic Relief and Andy's Wild Adventures and some other really wonderful things like that but the team that's been assembled are people that are really passionate about seeing this come to pass. We've got the guy who was the production executive for the Blue Planet. One of our executives also ran and was the controller for CBeebies. One of our execs in America was very senior in Disney.

There are a lot of really high quality people who have come on board to make this a real success.

Jeff: That is absolutely excellent. What's the timescale for this? When are these things released?

LWC: It's been quite an exciting year. We've just done a pre launch at the two Spring Harvest in Minehead and Skegness and had teams of people there. We're going to be doing a London premier on the 21st May so do get in touch with the Wonderborn Studios. That's going to be in Soho in London. Then we're going to be doing several different launches in different festivals around the UK and looking in September to be launching in America.

Jeff: So there's quite a range there of things - DVD, app, books.

LWC: Yes, everything supports each other. When we started this project we set ourselves some mission statements one of them was this: if you were a Mum or Dad or carer or church, you would be able to access a world of media through the Little Worship Company; not just one thing but several things.

We've made curricula for Sunday schools and Messy church and things like that. We've made devotionals for parents to be able to read and pray with their children and we've also made this amazing box set of DVDs; it gives you 4 hours worth of footage that would allow children to watch and absorb just brilliant faith based media.

That's Series 1 and the hope is, depending on how well it all sells, and how quickly it does, that we will fairly rapidly move into Series 2 to continue to grow the Little Worship Company.

Jeff: That would be excellent. I have often thought it would be wonderful if we had something to insert into a whole range of activities when you're doing holiday clubs and you're looking for something for that younger age group especially the 0 to 7s.