Making A Difference In Areas Of War And Poverty

Paul Calvert chats with Ken Moore in Bethlehem about his journey and the mission work he has been doing there as well as in Gambia. 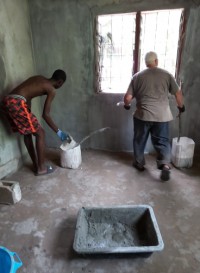 Ken: Originally we were going to spend about 20 days in Gambia, doing a little bit of missions work with the OCC, (Operation Christmas child) that is the Christmas shoe box and stuff like that. But upon making plans we realized it would be financially smarter to also come to my friends place at the House of Hope in Bethlehem. So we did a couple weeks of ministry work in Gambia and then we have come here to Bethlehem to do whatever the Lord leads.

Paul: Was this the first time of doing a missions trip?

Ken: It has been the first time for me to do anything like this in a sense that I have never been in a jet plane, so yes this has been quite an eye opener for me.

Paul: What were you actually doing in Gambia?

Ken: Well when we got there we knew that the church was going to be making plans to build a school because they don't have a school system within that town. I knew I could do physical labour, and as there were a lot of trees in the ground where they are going to put the school, I knew I could help clear the area. So for 2 weeks I have done old school chopping, digging and removing trees, shrubs and stuff like that so yeah it was good work.

Paul: So if there is no school there these children must be uneducated. Are they?

Ken: Most are, yes. Something that has kind of opened my eyes to life in a very poverty stricken area. When you get there you first notice that a lot of them are in bare feet, there are dirt roads, you see the garbage and the whole living style is very lacking. We were drawing water from a well which has frogs in it, so yeah they don't have even these basic things. They don't have a schooling system, so that is why the church is planning to give a new start and a hope, that they have a future as right now they don't.

Paul: This must be very striking for you coming from a wealthy country like Canada into Africa where they don't even have running water. Did they have electricity?

Ken: The place where we stayed at didn't have electricity on what we would call the grid. It was basically just a battery which the sun would charge and that battery would give a little bit of light at night but there is no power. Many of the places were in huts but there are obviously some places that would have everything and you can see where the influences of finances are.

Paul: So without the power you don't even have a refrigerator!

Ken: Yeah so every morning they would have to go and buy what they would want to eat that day as well as blocks of ice because it would spoil over night as it was so hot. But everything costs money, money of which they don't have a lot of.

Paul: Who was responsible for getting the water every day?

Ken: Usually it was the Pastor's wife, she did a lot of it. If you want water, say for instance you have to go to the bathroom, you would have to pack a bucket of water with you just rinse the area where you are going. It's kind of a community thing, everybody puts together.