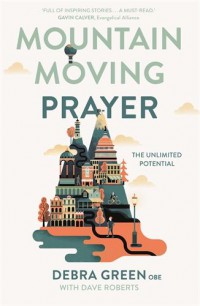 Jeff: So, Debra, you've got this fascinating book called Mountain Moving Prayer, a lot of it is testimony. The organization is called Redeem Our Communities and it talks about the effect of praying big. Somewhere along the line you say how you believe God had called you specifically to pray about big issues.

Debra: Yes, that's right. We had 7 years of prayer in the city of Manchester, which is where I'm from, which had the reputation back in the day of being Gunchester and some negative connotations that were attached to the city. We really felt that the Lord said the answer was to bring the churches together to pray for the welfare of the city; pray for things like education, healthcare, law and order and tackle some of these big issues in city-wide united prayer.

The bible talks about where brothers and sisters dwell together in unity, there I have commanded a blessing. We very much began to see some of the social issues in Manchester begin to change through the power of prayer but also the power of partnering with organizations together. And working together has now become ROC, which is a national charity working all over the UK.

Jeff: That's a key feature of the book, the working of partnerships.

Debra: Yes, I'm inspired by what the bible has to say about partnership and how much more we can achieve through partnership. The idea that partners working together can achieve more than we can achieve on our own starting with prayer which very much then leads to action.

We partner with police forces, fire service, councils, housing associations, schools, NHS, different people who have got an interest in community well-being. Churches, of course at the centre of that and how we can empower the church to become people that can change communities for the better.

Jeff: For some people listening, the extent of their prayer might be Mother's got an operation next week; I've got an interview on Friday, please God help me. I'm not discrediting that but this is quite a step away from those simple prayers.

Debra: I've tried to include all those prayers as well. I've told a few personal stories about how prayer has been transformational in my own personal life. For example, with something that happened to my son when he was 17 years old and then my prayer partner having these two brain tumours, different things like that. But yes, you're right, we're very much looking at what we call community mountains. It's personal mountains that we can move in prayer but also God wants us to move some community mountains.

It's moving along the lines of what can churches do to affect some of the issues they are facing. We've got a massive issue of loneliness in the UK at the moment, loneliness amongst the older folks. We've got a whole big spate of knife crime that people are very concerned about. We've got issues with what's happening with family breakdown; families having multiple problems, what the government calls troubled families. There are so many issues in the community, so how can we begin to change some of those community mountains and move them through prayer.

Jeff: You quote John Dawson who says each city is where it is for God's purpose. Can you unpack that a bit? Do you believe each church in that city is there for a purpose?

Debra: Absolutely, provided we are tuned in to what God is doing. Obviously there are some negative things happening in cities but I believe cities have a redemptive purpose. I've gone into a bit of detail about that. What is our city here for? You could also say town or village. What are its characteristics? What are we good at? Are we friendly? Are we hospitable? Are we entrepreneurial? Are we pioneers as we are in Manchester? We can play to those strengths.

Jeff: The catchment area in Stoke on Trent used to be deemed a bad place to live but the people are wonderful so that would be a strength that you build on. It's got a history of creativity with the potteries and even spiritual movements like the birth of the Primitive Methodist church, so you'd say those are the things, the DNA of a city, that we should be focusing on.