Jeff Short chats to Rupert Shortt who is the editor of The Times Literary supplement, a research associate at the University of Cambridge and author of the book Outgrowing Dawkins. 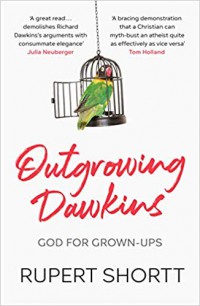 Jeff: It really is a great pleasure to have you on the program. I do several book reviews in a year. I don't think I've ever had one that's been given to me that's had so many endorsements by professors. Could I start by asking you why the book and why now?

Rupert: Well, we probably need to remind or inform our listeners about Richard Dawkins, the arch atheist, who has written a book called Outgrowing God. So you don't understand the title of my book without knowing about Outgrowing God: A Beginner's Guide to Atheism. That appeared last September and I got scribbling quite hard at the suggestion of my publishers to write Outgrowing Dawkins: God for Grown Ups.

Jeff: Yes, because just in that title Outgrowing God there's a suggestion that if you have a faith, if you're a religious person, if you want to describe it, that actually your thought processes aren't adult.

Rupert: That is one of the big problems that I have with Richard Dawkins. It isn't that there isn't a solid case to be made for atheism. I've said on page one or two of more than one book that I've written that I respect atheism as a worldview. But I do wish that the compliment could be returned. It's very easy to poke fun at religion. You can poke fun at anything. If you said because of the crimes of Mao and Stalin and Fidel Castro I dismiss all left wing thoughts, for example, you wouldn't be given the time of day. A reasonable person would say well, how about the other side of the argument? How about European social democracy? The picture that Richard Dawkins gives of religion over and again, but particularly in that huge bestseller of his, The God Delusion, from about 14 years ago, and now in Outgrowing God, it's massively one sided and ill informed.

Jeff: It struck me when I was reading your book that it's very balanced, it's very fair. I've not seen many people writing from the faith perspective who would say there is a credible position of atheism; you can understand why some people arrive at that destination. But you seem to be saying it's unfair to compare the best of science with the worst of religion, which sometimes appears to happen.

Rupert: Yes, it's more than that really. His own arguments are extremely weak. He gives lots of examples of toxic religion but that in itself has no logical connection with whether the claims of religion are true or not. I might be teaching a class of kids how to do algebra and I may be a harsh or a cruel teacher and something may need to happen about that to make me treat my pupils more fairly. But that has no logical connection with the truth of the mathematics. In his book Dawkins gives this very one-sided picture as I say, and then he says evolution accounts for existence as such. Because evolution is true, therefore belief in the creator God is false. Evolution is simply the mechanism by which we have come to be where we are. It doesn't account for existence as such. So his own arguments are internally inconsistent.

He also has a line about all of us, whether we are Christians, Muslims, atheists, we're all atheists with respect to most gods that have ever been worshipped - Zeus, Aphrodite, Wotan what have you. And the atheist simply believes in one less God. What he supposes to be his trump card is more like an Achilles heel because the whole point of developed monotheism around the world is that God is not pictured as a thing among other things, the way that gods have been in previous years. God is on a wholly different plane of reality. He's throwing a stone up into the sky and trying to hit a cloud. He doesn't even get to the first base in terms of understanding the landscape here.

Jeff: I was quite impressed because you do point out that there's a lazy view that would say that some strands of what we may call Hinduism, that's a polytheistic religion but you point out that in many cases there would be a supreme God, however you portray him, above the other gods. Many of the religions we call polytheistic there is actually a monotheistic level above all the others. I find that intriguing.

Rupert: I think that's true and what it suggests is that across the world, transposed into different cultural keys - I'm not arguing for a soggy mish mash here - but nevertheless you can see important points of similarity between a faith like Hinduism and the Abrahamic faith. It doesn't mean that one can't have a strong belief in one's own tradition as disclosing the fullest truth of our being. It just means we don't need to throw out the baby with the bath water or to see every other tradition than our own as hopelessly defective. So there's that but there are other strands in this book as well.

There's something about the bible, which for Dawkins is a classic case of a mirror image of the fundamentalism that he rejects. He would want to ask if the story of Noah's Ark happened as literally recounted in Genesis or whether there was a specific transgression involving a snake in the garden 6,000 years ago. It's never been part of the Christian Creed to take Genesis literally in that way. You don't need to be simplistic about what is basically a fairly rich and complex text. You can, however, believe that what Genesis is saying behind the narrative is that we're here as a universe because of God's choice and God's act. From the start things have gone wrong with the human race but despite that God hasn't given up on us. That would be something about the bible in a nutshell and I go on to talk about the New Testament and what Jesus stood for and so forth. An irony about Richard Dawkins' book is that even on the science he's rather old fashioned and out of date.

I interviewed a number of distinguished scientists when I was researching my book, several of whom were people of no religious conviction at all but they said to me never mind about the theology, he's up the spout on the science because it's moved on from then, neo-Darwinism of the 1970s when Dawkins wrote his first big bestseller, the Selfish Gene. Finally, there's something about the social and political dimension we need to draw out, I think, because his line is very much that because religion is incoherent in theory it has been a colossal source of harm in practice. That's cutting all sorts of corners. I want to say that faith driven action has generated a colossal amount of social capital. It doesn't mean that religion is the only source of social good but I think there's a bit of a danger of sawing off the branch we're sitting on if we don't acknowledge the enormous cultural footprint, to change the metaphor, of religions around the world, particularly the monotheistic faiths.

Jeff: The subtitle of the book is God for Grown Ups. I feel first of all that you're asking for a respect for the position that many people hold because you feel that caricatures are being offered. It says on the back cover of your book 'In his arguments there's a weakness for crude caricature, a selective way with evidence, ignorance of philosophy and history as well as theology, even questionable interpretation of science.' I suspect you'd like an intelligent conversation because sometimes, as people will, accept or just throw out Dawkins has proved this, you'd like to speak to people whose faith is well, the bible says and not given much thought as to what has actually been spoken of.

Rupert: I think that's a really important point, thank you Jeff. In some sense I'm arguing on two fronts. I don't think that believers have any grounds for complacency. What I'm saying is not only that hard line, militant atheists should be less patronising towards religion, I would also say there's a lot of dodgy thinking at the opposite end of the spectrum, particularly in conservative parts of the religious world. It's more than one kind of person that needs to get their house in order. Believers don't need to be frightened about science. The great scientific geniuses who created the modern world effectively, people like Galileo and Descartes, Copernicus and Newton and Liebnitz weren't just great men of science, they were men with very serious theological interests and commitments as well.

Yes, of course, there have been tensions between science and religion along the way but interestingly that was less so at the dawn of the modern world; it happened rather later. I see this as a bit of a phoney war and in a little autobiographical moment I do say that I shared a school biology teacher with Richard Dawkins. He's about a generation older than me but when I was at the school about 25 years afterwards I had the same biology teacher who recently died in his nineties. I've heard Richard Dawkins in interviews and articles expressing gratitude to dear old Mr Thomas at school for igniting his love of science. What he's never owned up to is that dear old Mr Thomas was a man of deep Christian conviction and would never have imagined that there was some inherent contradiction between science and religion that Richard Dawkins appears to suppose.

Jeff: What a fascinating irony! Rupert, thank you so much for coming on the program and also for your writing. In your previous book 'Does Religion do More Harm Than Good?' you're speaking about the elephant in the room. Many people don't want to put a foot into that camp. Your new book is not only a great source of defence but it's also a great tool to have to sit down and hold as a mirror to yourself and your own thoughts.