Praying For The Peace Of Israel

Haim Otsarya, from the Israel Prayer Tower, talks to Paul Calvert about praying for Israel. 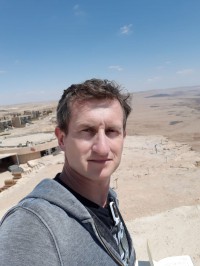 Paul: What is the Israel Prayer Tower?

Haim: It is a prayer centre, where we are doing our best to establish a 24/7 prayer chain. Praying for the nations of the world, the peace of Israel and all those who dwell in Jerusalem as it says in Zechariah 10.

Paul: Where are you based in Israel?

Haim: We are based in the centre of Jerusalem in a building called City Tower on the 20th floor. Individuals are invited to come and pray or just spend quiet time during the day.

Paul: Are you all over Israel or are you just in Jerusalem?

Haim: At this moment we are only based in Jerusalem at the Israel Prayer Tower, but we are part of a network of prayer towers around the world. We have almost 110 prayer towers in 14 countries.

Paul: I understand that this is the only one that is actually a tower?

Haim: Yes the ministry started their first prayer tower in India actually, about 40 years ago. Most of the places they symbolically call prayer towers, but this is the only one that is technically in a tower and at the top of the tower as well.

Paul: We are on the 20th floor, what can you see as you look out from the Prayer Tower?

Haim: One of our main assets is not necessarily the building, but the view is an asset on its own. We have a 360 degree view of both modern and ancient Jerusalem, including the Mount of Olives. We see all the seats of power, the political and religious ones. We see the parliament, we see small parts of Bethlehem, and we see the Temple Mount and the Old City. We see all the main sites of the Mount of Olives including Gethsemane, the Church of Ascension, Mount Scopus University and so on.

Paul: Does seeing all these things help you to pray more significantly?

Haim: I believe so because I love what Paul says in 1 Thessalonians 5, where he prays for the church and says, "I pray that the Lord will sanctify you completely and keep you blameless for the day of the Lord's appearing in your spirit, soul and body." It shows us that we are made up not only of the spirit, but we are a made up of spirit, soul and body.

Your soul is also important for the process of the prayer. I believe that the environment in which we pray is important. When people come and pray for Israel and Jerusalem and they can physically see the Temple Mount and the Mount of Olives and they even see on a clear day the Dead Sea, it's very inspirational and it keeps the focus in your mind.

I see people moved to tears especially pilgrims and visitors, from outside Israel, that come and see this view. For them it is so dramatic, it enhances their prayer experience.