Paul Calvert spoke with the director of The Centre for Cultural Heritage Preservation. 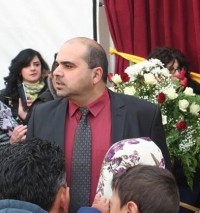 The Centre for Cultural Heritage Preservation was established in 2001 and has pioneered the preservation of cultural heritage resources in Bethlehem and the surrounding villages and towns. Having renovated more than 15 traditional buildings in Bethlehem, Paul Calvert spoke with Director Issam Juha, about why preserving Palestinian history is important.

Paul: What is the Center for Cultural Heritage Preservation?

Issam: The Center for Cultural Heritage Preservation was established in 2001, as an offshoot of the Bethlehem 2000 project. That was for the preparation of Bethlehem for the second millennium celebration. After the celebration, the Palestinian Authority realised a need for establishing an organisation, that has the mandate to look for and maintain the protection and cultural heritage resources in the district of Bethlehem. That is why we are here today.

Paul: What sort of restoration projects do you have?

Issam: We look for the built up heritage of the Bethlehem area in general. In the last three years we are even restoring buildings in other districts. The centre has expanded its mandate and we try to preserve all kinds of even intangible cultural heritage, such as oral history and the stories. We have been concerned in the handicrafts too. Our aim is to utilise cultural heritage resources as a tool for development of the area. In a way we preserve, but in order to preserve and have sustainability for this preservation process, you need also to convince people that cultural heritage resources are an important tool for socio economic development and could be for touristic development.

Paul: Do you have many old houses in Bethlehem?

Issam: In Bethlehem as a town we have 1200 buildings, traditional buildings that are more than 100 years old.

Paul: Do you just work in Bethlehem?

Issam: No we are working in Bethlehem, Beit Jala, Beit Sahour and the surrounding villages and towns in Bethlehem district. Now we have expanded to work in Bethany, in a town in the south, in Ramallah, in Jericho, and other areas.

There are other organisations who do repair work like we are doing; there is Hebron Habitation Committee and the Welfare Association who are also restoring built up heritage. There is some kind of ethical agreement with these organisations, to cooperate in restoration of the built up heritage in the West Bank and Gaza. Each of the organisations are taking care of a certain geographical area.

Paul: You must be creating jobs as you are doing this work.

Paul: Creating jobs must be having a good impact on Bethlehem as well.