Reflections On The 50th Anniversary Of Mary Whitehouse And Mediawatch-UK 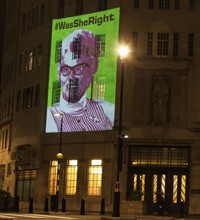 An image of TV campaigner Mary Whitehouse appeared on the side of the BBC in November to mark the 50th anniversary of the organisation she founded: Mediawatch-UK

Its fifty years since Mary Whitehouse first called for change. To mark this anniversary, the organisation she founded, Mediawatch-UK, commissioned research looking into the state of British media, its impact on today's society and whether the public feels confident that complaints about disturbing or unsuitable content are being dealt with effectively. To find out more about this Heather Bellamy spoke with Vivienne Pattison from Mediawatch-UK.

Heather: So first of all, can you tell us what the results of this survey were? What were the things you were looking at?

Vivienne: We asked 2,009 people, quite a large range of people across a fairly even gender split from all over the country and all different age groups, from 16 through to 70-something. We asked them whether they had ever seen anything on television that they felt was inappropriate before the nine o'clock watershed - and, incredibly, 100 per cent of people had seen something they thought wasn't right and shouldn't have been shown. So then we said, "Have you actually done anything to express your dissatisfaction?" and only 25 per cent of people had taken the time to make a complaint. So we wanted to know why that was and, rather interestingly, we got quite a different number of responses. By and large it seemed to be because people didn't think that making a complaint would make any difference. "There's so much that breaches decency," said someone, "that it's clear no-one in authority cares, so complaining would be pointless," which I think is very interesting.

Heather: So, of those 75 per cent that don't complain, it's more an impression they've got, than they have complained and they've received a lack of response?

Vivienne: That's right. Although having said that, we did ask people who had complained how they'd got on and just under 50 per cent of them either had no response or weren't happy with the response they got and genuinely had been left not feeling particularly happy. But I have to say, if they've got the idea that there's no point complaining because nothing will be done, I have quite a lot of sympathy with that. Going back a bit to 2010, when The X Factor: a programme that's marketed to children and very likely to be watched by them - showed some semi-naked dancers and quite sexualised routines, lots and lots of people complained to Ofcom and Ofcom said, "Well this material really is at the very margin of acceptability," and yet they failed to do anything. Consequently, what was then described as being at the very margin of acceptability is now, four years later, absolutely mainstream. So I have every sympathy with people who think: "Well actually, you know, my complaint is worth nothing because it appears as if nothing's being done."

Heather: That point you just made about things that are marginalised becoming mainstream, is that just on that one programme, with X Factor, or do you think that's a wider issue?

Vivienne: I think it is a wider issue. Broadcasters have lots of things that motivate them and one of them is ratings and one of the ways to get ratings is to get people talking about your programme and to push the boundaries, because people will talk about it. I quite understand this motivation - but you know there is a danger that it can lead to, increasingly, content that we never meant to get to. I think soap operas are a pretty good example of that - and in fact when we asked people what they thought the effects of watching inappropriate television might be, one of the areas that came up pretty heavily was soap operas. People said, "I'm slightly concerned about this and I think that it might have an effect on those who watch it, particularly children."

Heather: Who's doing the most complaining of the ones who did? What age group?

Vivienne: It's a fairly even split. I thought that, probably, it would be older people, but that's just not been the case. We've seen plenty of 16-24s complaining about it: in fact the third highest percentage of people who were complaining were from that younger age group: 36 per cent of them. So it really is across the board. It's not, as you might think, that people who are older are worried about things; I think people who are younger are concerned too. And we need to listen to those particular voices - they're the ones who have grown up with this, who have been subject to it more recently than we have.

Heather: So going back 50 years, as it's the anniversary of Mary Whitehouse starting Mediawatch-UK, why did she start it all those years ago?

Vivienne: She was a teacher and what motivated her was she was listening to the conversations of the girls in her care - she was at a girls' school - and she was amazed at how they were taking their attitudes from what they were watching on television. In fact she overheard a conversation at one point where one of them was saying, "Well I didn't think that this was ok, but now I've seen it on television it must be," and she realised what a powerful medium it was. This was obviously in the beginning of the sixties and the permissive society was just kicking in in London, not necessarily quite so much around the country - and she thought, "No, this isn't right, something has to change," because she was fearful of what the results of that might turn out to be. And I think she's been proved quite right.

Heather: Do you think her works made any difference over those 50 years?

Vivienne: Yes, absolutely. We can point to specific examples. So, for example, the lobbying that we did in the seventies led to images of child pornography becoming illegal - it's quite incredible to think that that wasn't the case until the mid-seventies, but there we are. It is because of the work of Mediawatch that we now have somebody that will listen to our complaints - I don't necessarily like what they're doing with them - but there was nobody then. After much lobbying, the broadcasting standards council, which is now part of Ofcom, came into being. I have to say I'm not sure that they completely listen to the voices of audiences - but I think that was very good, that was a good fight. More recently we've put a lot of pressure on Government and industry to do something to protect children in the online space and I'm very pleased to say that that campaign has shown results and now one-click filters are available to everybody across the country and everybody is going to have to make a choice as to whether or not they want those by the end of the year - and if they just click through quickly they'll be on as a default. So she has made a difference. But actually her biggest legacy, I think, is she started a conversation: she showed us that we didn't just have to put up with things as they are, that we have a right to say if we're not happy.

Heather: Would you say things have got better or worse over those years?

Vivienne: Well it's very easy to have a knee-jerk reaction and think everything has got so much worse, but that really isn't the case. I'm happy that we see a lot less racism and a lot less sexism on television today and I think that that has been a positive thing. But on the other hand I think we're seeing an awful lot more portrayals of violence, particularly sexual violence, which I think is incredibly worrying - and we're also seeing it used almost as a titillation, you know: lascivious camera shots on lots of violent action and violent footage. I don't think that that has been a positive development and I think that television and a lot of the programmes on it have become increasingly sexualised, which we're now beginning to learn, and we're still in the foothills here, but it's really quite damaging for children growing up with these images around them. So tempting though it is to say, "No, everything's worse" - some things are a lot better and some things really are not.