Jeff Short chats to Ben Cooley about his inspiring book, which offers encouragement and advice for other leaders, based on his own experience. 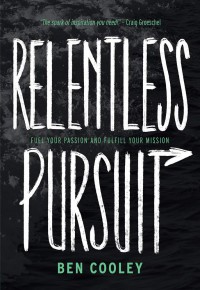 Recently profiled in Panorama and reported on CNN, Fox News and many newspapers, we saw a crime gang that had trafficked over 400 individuals into the West Midlands and the UK. Coming from Poland and exploited into supply chains, they were withheld food, living in squalid conditions, no access to clean running water and held as slaves. Working with West Midlands police, Hope For Justice supported the victims through to prosecution.

Jeff: So, how does Ben Cooley come to found an organisation such as Hope for Justice?

Ben: I was an opera singer at the time; I used to wear tights and make up and dance around. I used to dream of being on stages all around the world. I attended this event at Manchester Town Hall and heard about the issue of modern day slavery. I walked out of the building that night and thought, if that was my daughter I would do something. And it was literally the next thought that changed the course of my life: they are someone's daughters, I should do something.

So I did what any young, passionate 26-year-old opera singer would do, I booked an arena in Birmingham to tell people about it and we got 5,884 people to our first event. Since then we helped 71,993 children last year. We have residential treatment centres for child trafficking victims and victims of exploitation. It's been an amazing ten-year journey of leading a team, inspiring people to make change and freedom possible.

Jeff: You said it a bit lightly, I did what any 26 year old would do. There are a lot of 26 year olds and other age groups out there. In your book you've got a chapter that says "What you tolerate, you'll never change." Do you think people are turning a blind eye or just thinking it is impossible to change these situations?

Ben: I'm a firm believer in being positive in a negative situation. I don't believe it's naive, I believe it's leadership. I wrote this book Relentless Pursuit to almost catalogue the lessons that I've learnt, evaluate the experiences that I've had in my life from starting an organisation from scratch. Learning how to build a team, learning how to deal with frustration and how frustration can be a motivation. Then developing organisation culture - and how do you build that from one staff member to over 400 staff members globally? We put this book together to be a resource for people in their relentless pursuit.

You're right; one of the chapters is called 'what you tolerate you'll never change.' In this world we tolerate so many things. We know things are going on but we don't identify them or do anything about it. We do that with our own personal lives; we know that we should exercise more; we know that we should eat more healthily. But what you tolerate you will never change. There needs to be a change in people's lives to help them to move from toleration to acceptance of doing something about it.

Jeff: I'm pleased to hear that because our station is in Stoke on Trent and being close to the motorway network quite often we see people who are dropped off at service stations disappear. We worry that they're going to turn up in abusive, exploitative situations. Who would you like to see reading this book?

Ben: It's for anyone, near the start of their journey or the finish. I was humbled by Craig Groeschel recommendation, he said 'It's the spark of inspiration that you need.' He's one of the most influential leaders, I believe, on planet Earth at the moment. I think it's a book for anyone who is starting a ministry, a church, a business or something that's going on in their community. I've recognised from someone who's started something that there are principles to growing what you have your dreams for, your purposes in life.

I'm a firm believer that you're a by-product of your environment; so choose your environment well. There's wisdom in this book from people like Sir Brian Souter who started Stagecoach, talking about the early days. People like Patrick from Rend Collective talking about how Rend Collective struggled for so many years and the principles that they put in place for their success.

Natalie Grant and pastors like John Siebeling who leads a church of 8,000. These are principles they have learnt over the years, not just Ben Cooley from Hope for Justice. Relentless Pursuit is a collection from people who have got their evaluated experience and consolidated it into a book to help you be a healthier version of you.

Jeff: There are quite a few names, like Andrew Barton from Thrifty Car Rental. You look at those names and what they've established, I most identify with that 26 year old up in Manchester that started with nothing but a vision and I guess you had faith.

Ben: Thank you so much for identifying with me. All these people who have written in it have got faith and I think Brian says it beautifully: faith has got him through some of the hardest challenges that he has ever faced. I could echo those thoughts. It isn't a crutch but it's a propelling relationship in my life that helps me to succeed.