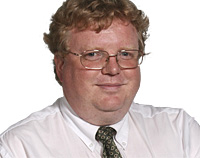 Students should be taught . . . ways in which scientific work may be affected by the contexts in which it takes place [for example, social, historical, moral, and spiritual], and how these contexts may affect whether or not ideas are accepted
(Science in the National Curriculum, Qualifications and Curriculum Authority, 2000, Key Stage 4, 1c - emphasis mine)

Students should be taught . . . to consider how and why decisions about science and technology are made, including those that raise ethical issues, and about the social, economic and environmental effects of such decisions

(Science in the National Curriculum, Qualifications and Curriculum Authority, 2006, Key Stage 4, 4b - emphasis mine)

It would seem that there has been a change from the word spiritual to the word ethical. For many schools, this may not really matter, or make much difference. Perhaps I am being paranoid in pointing out the difference. Readers should also understand that I welcome the decision to teach the ethics of science. There has frequently been the mistaken notion that science has nothing to do with ethics or morality - yet each new scientific discovery brings with it the need to address ethical issues. One only has to think of teaching topics such as nuclear power, climate change, nanotechnology or embryo research to realise the importance of encouraging pupils to understand the ethics of the issue.

Christians maintain that an ethical position can only be fully understood in the light of divine revelation. The question we ask about an ethical issue is 'What do we learn about this issue from the Bible?' In my book 'Truth, Lies and Science Education', I argued that scientific practice and theory cannot be divorced from a spiritual dimension. After all, most discoveries of the modern scientific era were made by people who believed the Bible to be true.

As I say, I hope that I am wrong, but it seems at least possible that the change in wording from spiritual to ethical is an attempt to impose an American style 'separation of church and state' from within school science laboratories, preventing the discussion of God by pupils. This, coupled with the recent trend in attempting to teach evolution - the world's favourite fairy-tale - as if it were proven fact, is, in my view, a part of a worrying trend towards an atheistic indoctrination of school children.

"Christians maintain that an ethical position can only be fully understood in the light of divine revelation."

And the evidence for this position is...?

Sorry, no fairies in science, only in mythology; that's the point - which, not surprisingly, you missed.

"...school science laboratories, preventing the discussion of God by pupils."

Yes, now I see how useful religion in science class would be. It's all so clear now.

There's creationist hicks in England too? That's too bad.