Star Of Wonder, Star Of Light

Paul Taylor comments on the Star of Bethlehem 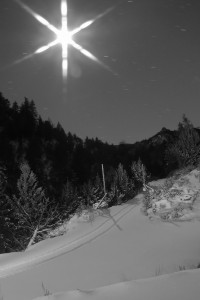 One of the enduring symbols used by Christians at Christmastime is that of the so-called Star of Bethlehem. What was it? How could such a star appear in the sky? Was it a genuine event, or part of an obscure mythology?

In order to understand the Star of Bethlehem, we need to shatter a few illusions, perpetrated by those who have only read the Bible superficially-including many church leaders down the ages. We read about the star in Matthew's Gospel. We read that it guided the Wise Men eventually to Jesus. But much of our traditional opinion about the star is incorrect. For starters, the traditional Nativity scene of three Wise Men standing behind a group of shepherds around a manger is not in the Bible. The shepherds did indeed attend soon after the birth of Jesus. But the Wise Men were later.

And when they had come into the house, they saw the young Child with Mary His mother, and fell down and worshiped Him. (Matthew 2:11)

Notice that Jesus' family were no longer outside the famous inn. They are living in a house. Not only that, but the word for "baby" is not used-instead, Jesus is a child. In order to attempt to destroy Jesus, King Herod ordered that all children aged two or under should be killed. This suggests that Jesus was about two years old at the time. Herod would have worked this out, because the Wise Men had told him when the star had appeared. Therefore, the star must have appeared when Jesus was born. It stands to reason that, if the Wise Men had travelled from the East, they would have taken quite a time for their journey-about two years, in fact.

Another unbiblical myth that we need to dispel is the number of Wise Men. Traditionally, we speak of three Wise Men, but the Bible doesn't say how many there were. Since the term is plural, there must have been at least two, but there could have been more.

Why did they come? The Greek term translated Wise Men is magoi, and is from the same root as our word magician. They were astrologers. Yet the Bible condemns astrology. So why were these astrologers looking out for a star? Many commentators have suggested that these astrologers were really more like astronomers. The home of astrology was Babylon, and it is from this place that the Wise Men probably came. Although pagan astrology is forbidden, we note that Daniel had the Babylonian astrologers saved, by his ability to interpret the king's dream. Perhaps some of these astrologers ceased venerating the stars, and studied them instead. They clearly had heard from someone that there was to be a Messiah out of Israel. Daniel would have been the most likely source of this knowledge. However, their knowledge was limited. They did not know to expect the Messiah from Bethlehem-the birthplace of the Messiah was prophesied in Micah 5:2.
But you, Bethlehem Ephrathah, though you are little among the thousands of Judah, yet out of you shall come forth to Me the One to be Ruler in Israel, whose goings forth are from of old, from everlasting.

This prophecy would have been unknown to them, if they were from Babylon.

So why were they expecting a star? This is likely to be because of a much earlier Babylonian astrologer, called Balaam. Balaam was hired by the nations around the people of Israel, as they were camped in the desert, before entering the Promised Land. He was hired to curse the Israelites, but every time he opened his mouth, God made him bless the Israelites instead. He tried-and failed-to curse the Israelites four times. In his fourth "oracle", God forced him to say this:

I see Him, but not now; I behold Him, but not near; A Star shall come out of Jacob; A Sceptre shall rise out of Israel. (Numbers 24:17)

The sceptre is a sign of authority, appropriate to the Messiah. But the word translated Star has the same root as the word translated as the "Glory" of God-for example, in the wilderness, the children of Israel were led across the desert by a burning cloud at night-the Shekinah Glory of God. The account in Matthew's Gospel suggests that this is no ordinary star. After all, this was a star that led the Wise Men to Israel, then led them from Jerusalem to Bethlehem and finally stood over the house where Jesus was. This strange non-stellar behaviour becomes more understandable if we realise that it was probably something similar to the burning cloud of the desert wanderings, rather than a ball of fusioning hydrogen out in the universe.

There is much to surprise us in studying this "Christmas Star". While we may not understand exactly what the star was, the Wise Men understood what it meant.

When they had come into the house, they saw the young Child with Mary His mother, and fell down and worshiped Him. (Matthew 2:11)

These mysterious astrologers knew that this star was leading them towards the One, whom they had to worship. As we ponder the reality of the Star of Bethlehem, worship of Jesus the Messiah should also be our purpose.

The Magi probably saw the host of angels that appeared to the shepherds, they wanted to check it out so they did. It took them sometime to travel to Jerusalem hence the baby Jesus was older when they finally got there.

When they came out of Herod's palace they saw the star again and were overjoyed, which tells us as they made their way from the east they had not been following it, but saw it on one occasion. "We saw his start in the east" Herod said "Tell me the exact time".

Angels are sometimes referred to as stars. Anything bright in the sky could have been considered a star in those days, as they didn't have the exact definition for stars that we do.

When they came out of Herod's palace they saw the star again and were overjoyed, it led them to where the child was. It sounds like an angel.

I really appreciate Mr. Taylor's article, in that it dispels the add-ons we have done over the centuries to the Christmas story. If I might make some comments ...
If you read Matthew's account (ch.2) exactly as it reads, the magi did not follow the star from the east. ..
Mat. 2:2 "For we SAW His star in the east..." They understood something of this star that they had seen, but maybe, because of the shift in the constellations through the seasons, considering also they were most likely from the region of present day western Iran (or possibly far eastern Iraq), being from the region of ancient Susa (of Daniel's time), they could not have followed the star. It is evident from Mat. 2:10, in their excitement - having first come to Jerusalem, because it was the city of the great Israeli kings of old - that they alas see the star again, as though it was appearing after a season of absence, only to confirm the scripture verse from Micah. King David, in Psalm 19:1 indeed declared that the heavens were declaring the glory of the Lord. God in heaven made sure that their foundation was not in the sky above, but in His written word. When they came to the truth of His word, the heavens simply confirmed it.
It was dangerous for these men even to be in the Roman empire, though Herod had forgotten recent history. His father had been booted off the throne by the Parthians barely four decades earlier: The Parthian kingdom was the kingdom due east of the Roman empire, the kingdom out of which the magi stepped - and Rome had tried and would try for decades beyond this time to conquer it. It was Rome who had helped Herod's father, (and later Herod himself) to get back and keep the throne. But the magi came, and then returned another way, taking back to their leaders, and maybe to the Jews who had never left (from Babylonian captivity) the story of the star, the prophetic word of Micah, and the new King of the Jews ... yes, of the Universe.