Paul Calvert talks with Daniel Carson from CBN Israel about how they are making a difference among the Jewish people. 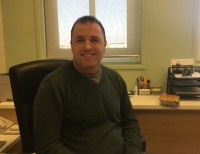 Paul: Daniel what is CBN Israel?

Daniel: The Christian Broadcasting Network is based out of Virginia Beach in the United States. One of the things they have always had on their heart is a love for Israel and so CBN Israel provides assistance and humanitarian projects here in Israel to bless the Jewish people.

Paul: When and why did you start here in Israel?

Daniel: We started about 6 years ago. Gordon Robertson had always had a heart for Israel and wanted to make sure that they had a presence and were making a difference among the Jewish people. They started the organisation and looked for projects that they could get involved with. I came on about two years ago and have been running it for the last year and a half.

Paul: Tell us about the work you do with Holocaust survivors?

Daniel: Well most of the Holocaust survivors are above the age of 80, but the scars of that experience are still felt even today. Many of them who ended up behind the iron curtain during the cold war never made Aliyah until the early 90's, and so those people didn't have a chance to really acclimate to Israeli life.

They came here as new immigrants later in life and many of them experience financial hardship and loneliness. So we try to not only provide basic needs in the form of food packages but also a sense of community and interacting with other survivors as well with other members of the community. This helps them have a sense of belonging as in these later years family is scarcer and many of them have lost their spouses. Loneliness is also a major need among the Holocaust surviving community, so we try to do what we can in order to alleviate these needs.

Paul: Talking about loneliness, I imagine that some of them have actually lost all their family so there is no family for them.

Daniel: Yes that is true, including extended family. Some of them did go to have families again but the challenges of the migration process, language barriers and a new culture is much harder once you are older. Getting settled in is not easy so the challenges to this community are great.

Paul: How many Holocaust survivors are there in Israel?

Daniel: There are still more than 100,000 Holocaust survivors in Israel and we provide assistance to about 1,500 a month, more or less. That changes, depending on our resources, but we try to alleviate some of the needs for some of these people.

Paul: Are many of them living in poverty?

Daniel: Yes many of them do live in poverty. Some of those who came to Israel immediately after the Holocaust were recognised in the West and there were assistance programs that helped them get established but it's not been an easy road for any of them. Sometimes the scars that you carry from major events in childhood continue to follow you even through your adult life and all the way to the end.

Paul: What are some of the stories that you have actually heard from the Holocaust?