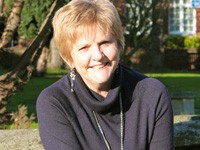 If you're someone who never believed the old adage, 'Sticks and stones will break my bones, but words will never hurt me', then a new book out could be for you. More focused on the harm our own words can do to us rather than other people's words, Speak Life is a book full of the teaching and practical help needed to speak words that will help rather than hinder. Author Bev Murrill is Executive Director of Christian Growth International, a church planting movement based in Chelmsford, Essex and a mentor to leaders. Sarah J caught up with her to find out more about her second book.

Sarah J: You've got a new book out called Speak Life and Shut the Hell Up. Great title; tell me about it.

Bev: I love the title and it is what it says on the tin, because it's not a curse, but it's a way of speaking. Our problem is often the very things that we say are the things that open us up to having all sorts of stuff go wrong and lots of pressure. I mean everybody has pressure, but sometimes the way we talk about it makes it worse instead of better. This whole thing about shutting the hell up is a book directed toward people who want to relearn how to speak in such a way that they can shut the effects of hell down from operating in their lives.

Sarah J: I guess that's particularly important when people are going through situations and they feel overwhelmed and they're tempted to have a bit of a moan and not see any hope and to speak negatively about their situation?

Bev: That seems to be the way. We gear ourselves toward those situations. We say why is this always happening to me? Or, something goes wrong, we say, well of course this would happen to me; things like this always happen to me. We put ourselves in a position where it's like we almost invite things to go wrong. In saying that I'm not in any way trying to say that if you speak everything exactly as you should that you're not going to have any pressure or any problems. I don't mean to say that at all. But I do think that there is a way of inviting problems to get worse. If you cut yourself really badly and you didn't wrap it up, you'd end up with flies and infection all over it; so you wash it and you put antibiotics on it and you put a bandage on it. Sometimes that's the way it is with our issues; we need to not leave them to be open gaping wounds. We need to find a way to say, ok we've got a problem, how can I speak out my trust in God; how can I pray; how can I speak more effectively about the situation that I'm going through?

You might be having trouble financially and you're worrying about paying your mortgage and you're trying to think ok, how am I going to do this? If you start saying, I'm not going to be able to pay the mortgage this month; I'm never going to get the mortgage paid; we're just going to lose our house; well you've already taken yourself a long way down the road towards seeing that happen. If we were to turn back to God in that and say, ok Lord, I don't have enough money to pay my mortgage this month, but I know that it isn't that you want me to lose my house and so I'm looking to you and I know that your word says that you will provide all my needs and so this is a need and I'm looking to you to see provision and to see breakthrough; not only does that calm you down and begin to put hope in your heart, but also those words go out into the spiritual realm in a way that begins to look for a solution rather than bewail the fact that there's another calamity coming.

Sarah J: So what we speak about ourselves can have an impact on us too?

Bev: Absolutely. If somebody says to you on a consistent basis, you are stupid, it's pretty hard to get past that and think, no I'm not stupid; I'm intelligent; I've got wisdom etc; however, if I'm the one saying it over myself that makes it so much harder. If I'm saying I'm so stupid, I knew I would make this mistake; I know I won't pass those exams; I know I'll never get promoted; it's like we're just laying a platform there to ensure that those things will never happen.

That definitely starts in our childhood and it does start with people speaking in a way over us that doesn't build us or strengthen us or make us feel as though we have any value. But when we take on board what's been said about us and we continue that cycle, all we're doing is proving that the people who started the cycle in our lives, that what they're doing is going to work rather than the fact that God loves me and he's got this amazing plan for my life and I need to find what he's saying about me and I need to be saying that.

Sarah J: So you're giving some very practical teaching to help people to understand how they can change what's coming out of their mouth to help shape the world around them more positively?

Bev: Yes that's absolutely it. I feel we all have choices, but learning to speak the language of life is really the language that God speaks. Whenever God opens his mouth he speaks out what could be and he speaks it in a way that builds and strengthens. For us it's really like learning a different language. If you go to Russia, in order to be understood you need to learn to speak Russian. In the Kingdom of God the language is a language of life. It's not the same as positive confession. I'm not talking about if I keep confessing that I'm going to have a Porsche outside my door then there'll be one, it's not about that. It's actually about changing my life and the lives of the people around me and building a sense of value and a sense of strength and possibility. 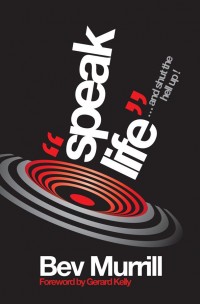 One of the examples that I used in the book is the one of David when he went out against Goliath. He was only a young guy and he hadn't really had any experience in battle, but he did have experience in being up against a lion and a bear and knowing that God could enable him to win. He had experience in knowing the power of the word of God in your mouth and taking your courage from that word, that that will be the thing that makes you able to win. Even though their entire Israeli army, which was a strong army with strong men who were used to battle and used to sword play, even though every one of them hid whenever the giant came out David didn't hide. David ran toward him because David had worked out what it is to have God's perspective and not a normal natural perspective, which is, I'm just a young guy here and there's this great big giant. He saw a giant, but above and beyond the giant he saw a God who's bigger than any giant and so that was what he spoke out; that was what he celebrated and that was his perspective. I really believe that many times whether we succeed or fail in life is all to do with perspective. When you've got God's perspective, even when things are tough, you can get a hold of your situations and begin to speak out the life of God over them and see them change.

Bev: I think when we are afraid is really the time to shut up; when any word that would come out of our mouth is the fact that the problems that we are involved in at the moment are overwhelming and they're going to swallow us up and we have no solutions. Those are the times to not say anything.