Emma's story is one of fear and loss, hope and strength, reality and acceptance and, ultimately, the victory of living an unexpected life with a faithful God. Stretched will encourage anyone struggling with baby loss or parenting challenges. 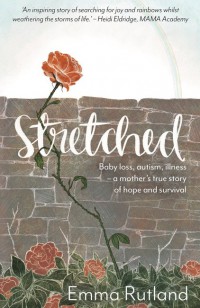 Emma: In September 2013 I happened to have more space in my life and I thought right, I'm going to now write my story. I think really it was based upon a call from Isaiah 61 how we've been anointed to preach the good news and to set captives free and our mourning he turns into praise. That's been my experience, I'm a very joyful person and so I feel that this is a call on my life to help people who have been through broken times and to show that there is always hope, and that God will bring you through, whatever it is you're facing.

Jeff: To recap, there's the loss of the child and there's quite serious illnesses at various times in the lives of your daughters. Where did you find the strength to face up to these difficulties?

Emma: It says in the bible that I can do all things through Christ who strengthens me. You can just say that as a sentence and you can say that's nice or you can actually believe that is the power of God and the power of God gives you strength. On a more practical level an attitude of gratitude plays a massive part in having strength. If you can remain grateful for what you do have around you then there is somehow strength that you can draw from. And hope: knowing that we live in seasons and that we're not always going to be living in a difficult season, that we're going to be moving on to other things. I had a support network; some amazing friends and a lovely family. It's a combination of lots of different things that have given me the strength.

Jeff: The book is raw in some places; it's brutally honest. It's not one of these oh, whistle a chorus and everything is going to be all right.

Emma: I think it's really important to be real. There is some real pain out there. It's so easy to come out with platitudes but many of us live in this very raw place and it can be very isolating, to be in such pain and no one knows what this pain is like.

Jeff: People very often say I know what you're going through and they haven't got a clue, have they?

Emma: No, they haven't; they might know the circumstances you've been through but they don't understand what the pain is like.

Jeff: You talk about being prepared for Italy and living in Holland. I've never heard people talk about this; it's the death of plans. If someone has gone through bereavement of a child it is the hopes and everything that has gone into the planning for this child and all of a sudden they've gone along with the child that you have already started to love. It's a wonderful phrase. Where did that come from?

Emma: It's in a poem by Emily Perl Kingsley, 'Welcome to Holland.' You can google it. I didn't put it in the book or I would have had to pay a lot of money. She talks about the process of preparation and suddenly you're somewhere you never expected to be. It might be Holland, it might not be where you thought you were going to be but there is gratitude to be had in this situation somewhere along the way. You have to look for it sometimes.

Jeff: What were some of the attitudes you came across when people found out you had lost a child or the child has been born with difficulties? Did you have to find these people or did they come to you? Support and friendship wise?

Emma: When I lost Daniel I had people around me. I went into myself a lot. People do want to come along with niceties and I had a bit of an episode with a dentist once who told me I couldn't have free treatment for the year after he died because my babies hadn't lived. My Daniel had been denied. I was really hurt and really upset. So I wrote him a letter and said to him this has really hurt me and he was apologetic. He hadn't thought it through. He took back what he said and he offered me the treatment that the government says I can have. Other people would be nice and say they were sorry about the loss. That was hard because he was a person and it's really not ok. One woman came up to me and said, "Where's your baby?", because she knew I was expecting. I said he's dead; he's in heaven. I knew I hadn't handled that conversation very well at all but that was all I could offer her. I gathered my belongings and I left.

Jeff: Having lost my own son I remember just afterwards we were in a church service and somebody's baby was toddling. You could see the whole room was saying please don't go near that man; he's going to cry or scream or something. It wasn't the case. But there were times when I felt I had to initiate the conversation because nobody wanted to speak about the loss.

Emma: I probably forced myself on people in that sort of situation. I thought if they can't speak to me then I can.

Jeff: There's a scripture that all things work for good for those who love the Lord. Has that been your experience?