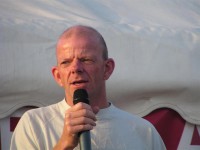 Phil: The "Jesus Surf Classic" is one of the biggest and longest running surf contests in the UK. It is organised by Christian Surfers UK as an outreach to the hard-core surfing community. Each year up to 170 of the UK's top surfers enter the contest, which is known by most as "The Jesus". In addition to the surf contest, we build a skate park for the occasion, have a big marquee with plasma screens showing surf movies. We put on a BBQ and organise a variety of activities for youngsters, and the community who are supporting the surfers, but not taking part in the competitions.

This weekend's (October 14th & 15th) event was the carry-over from the first event in September. It was the first time in 14 years that we had no waves on the day, which meant that we carried over 5 of the 8 categories to this weekend. However, we really felt God was very much "in" the first weekend, as even though the waves failed us on the Saturday, it enabled us to build friendships with the surf community who had gathered for this weekend.

The completion of the contest this weekend was amazing. We had virtually perfect surf on the Saturday with 4-5ft beautiful waves and ideal contest conditions and surprisingly mild temperatures for October. Sunday's finals were again held in very contestable conditions and the presentation on Sunday afternoon was a great occasion.

Heather: What were the categories and who won?

Phil: The winner of the main event, the Open Surfing, was a travelling Australian surfer who got a wild-card entrance to the event on Saturday morning and impressed everybody with his powerful display of surfing.

Other key winners were current English Ladies Champion Kathleen Spears, who took victory over the current Welsh Champion Joanne Dennison in the Women's Open Surfing. The Masters (over 35s) was won for the third year running by Roger Knight in a very tight final.

In the younger categories, Jayce Robinson took the Junior Title (U18) in a very, very close final and Toby Donachie won the Cadets.

The standard of surfing throughout the weekend was very high and it's been great to see some of these youngsters growing up through the years and getting to know them, their families and friends through the event.

Heather: Who can enter your contests? They are yearly, aren't they, or do you also hold other ones throughout the year?

Phil: The Jesus Surf Classic, along with the other surf contests we organise, are primarily run to reach out to the surfing community who don't know Jesus and the vast majority of surfers who enter are non-Christians. Running these events is a great opportunity for us to put on a great event which people enjoy, judging by the number who come back time and time again and the size of the entry. Clearly those taking part feel it is "fair" and well run.

The Jesus Surf Classic is an annual event, which we have run for the last 14 years at Croyde Bay, North Devon. It's great to see how the event has grown over the years and we now have to limit the entry.