Taming Of A Villain

This honest and candid book tells of Allen Langham's story of how as a lost, hurting boy, in an 18 stone, steroid-filled, violent man's body he was pulled out of the darkness of shame, bitterness and pain by God, who poured his love into Allen's heart. 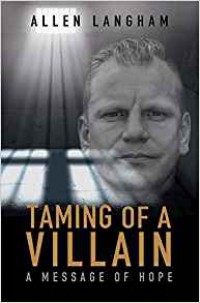 Jeff: I have to say it's an incredible book that you've written. There were times when I had to step away from it and say this isn't fiction, this isn't some television drama this is a bloke going through hell and back. What prompted you to write the book?

Allen: In all fairness, it was part of the healing and the restoration that God took me through. The first three chapters took a year to get through because I was doing a series of interviews and dictation and obviously the early childhood trauma took a lot of processing. I think God used it as a way of me trying to understand that life that I'd led before, because as it says in scripture you become a new creation in Christ. But when you become a new creation the old trauma and the old baggage needs unravelling and making sense of before you can go forward, and that was the process I found myself in.

Jeff: The book is raw; it's honest. You don't cover anything up like there was a one off encounter and everything was rosy.

Allen: I was very keen to get that across. I wanted people who come to Christ to know that it's a process and a journey and perfection is unheard of. We're all imperfect and it is messy. It's not simple especially when you come from a background of criminal behaviour, drugs, homelessness, prison and all those different things they leave scars.

Jeff: On the back of the book it says, "The story of Allen Langham, former professional rugby league player with a promising future" then it talks about the "path of drink, drugs, organised crime, struggling with the legacy of a broken family and a troubled past that formed the arms of addiction playing out his feelings of frustration and anger within an arena of violence." That's the past but that's what you had to work through. Any one of those would probably be enough and you've got full jack, queen, king, ace, haven't you?

Jeff: And yet, reading the book, this is going to sound bonkers, but it sounds like there's quite a soft, sensitive chap. You might beat someone to pulp but when you were good you were very good.

Allen: The heart was always there, there were circumstances and loss. I was a very loving young boy, I wanted to be accepted. I was loving and caring in relationships. But other people's behaviour towards me and life's circumstances, the situations that we went through left scars.

When I first went to prison as an eighteen year old it was a culture shock cos I had to become tough. It was a learned behaviour and I was very good at it. People looked at me in adoration for my fighting skills. I'm an all or nothing kind of guy so I did the bad stuff very well, as well as the good stuff. But my loving heart has always been there and once we could take those layers of pain and trauma away, that loving heart could reveal itself especially with the Holy Spirit and Jesus at work within me and through me.

When I went to share in one of the prisons the minister said Jesus is radiating out of this man's eyes and that really touched me because it was such a beautiful comment to make to someone who was an ex-prisoner and very violent.

Jeff: You make some passing references in the book like the police coming out, seeing it's you and driving on. So for somebody to say you've got love coming out of your eyes or the policeman coming up and shaking hands with you or hugging you, that's wow, that's a real change.

Allen: Just recently a new coffee shop opened in our local area and I went in and said to the owner how are you doing, how is it going, nice to meet you. Just being civil. And he said I know you very well; I arrested you a lot of years ago - I'm a former police officer. I wanted the floor to swallow me up but it didn't.

I went to the car and got a copy of the book and walked in and said I'd like to give you this. Cos that's not me anymore; this is who I am and could I have a cuddle. And he came round and gave me a hug. I say in the book hugging the judge who sent me to prison, God sends me these people who I hated. It's a very strong word, hate, but when love turns to hate it's a powerful combination. I was full of hate and bitterness and resentment.

Jeff: There are some very powerful parts of the book. It's one thing to talk about Jesus heals but you're talking about inner healing, about cleansing people. This is so out of the experience of a lot of people. You talk about demon possession.