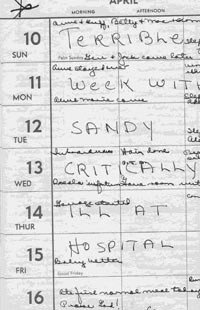 Winners of sporting events or other competitions often give God the glory for their win. This article involves a contest that I entered but didn't win, but God played a huge role. I have to give some background and details, but hope you find it encouraging.

This is the 11th year of an annual music competition called the International Acoustic Music Awards ("IAMA"). People from all over the world compete in IAMA by submitting their recordings of their own original songs. It is open to both professional and amateur musicians. The judges are music industry professionals, including A&R managers from record labels, publishers, and producers. Entries are judged on music performance, production, originality, lyrics, melody, and composition.

IAMA has established itself as a premier music competition on the world stage. Its website is www.inacoustic.com, and its Artist Relations Director is Ms. Jessica Brandon.

IAMA is primarily a competition for singer-songwriters, but it has an "Instrumental" category that is very competitive. In 2010, a guitar composition of mine called "Le Mans" was awarded First Prize in that Instrumental category.

That honour was very gratifying to me, and I have shared testimony about God's involvement in that tune of mine. (My testimony is contained in a book by John August Schroeter called Between the Strings: The Secret Lives of Guitars.)

In 2014, I decided to enter the contest again, with a tune of mine called "Breakout." That song itself was a gift from God to me in 2002.

Here's the story: in 2001 I had released a guitar CD called "The Lea Rig." It contained my rendering of guitar solos, as well as one song I sang, and a number of tracks in which I played with other instrumentalists. In a way, that CD was a complete statement of who I am musically. It may be my favorite of all my CD's (although I don't ordinarily spend much time listening to my own stuff.)

After I released that CD, I told myself that I wouldn't do another CD until I had composed more pieces for guitar. I was aware that my primary calling is as a translator onto guitar of sung pieces and music played on other instruments. I didn't really expect to be able to compose many significant tunes for guitar, so I figured that Lea Rig would be my last CD!

The Lord then proceeded to bless me with three original tunes, and "Breakout" became the title cut on my next CD. (I can recall, in addition, the time and place when the Lord specifically gave me the last 20 seconds of that tune.)

Fast-forwarding to the present. On the day this year's IAMA results were due-February 6, 2015-- I was up at 1 AM to check the website in case they came out early. (Ok, I'm obsessive/compulsive, but I contend it's not a disorder.) They didn't. So, I checked regularly throughout the day. Nothing yet.

In the midst of this-and unrelated to this (I thought)--I decided, just for kicks, to look through my late mother's old daily calendars. She had kept these from her youth, starting in the 1920's! After looking through some ancient years, I landed on 1948.

In going through this material, I happened upon the attached page. (I am "Baby" and "Sandy" in the entries.) My mother's huge lettering on that page dramatically reveals that in April 1948, at 10 months old, I had been very sick, and was rushed from our home in central Pennsylvania 200 miles to Children's Hospital in Philadelphia, where I spent a week in critical condition. My family was in great fear for my life.

I recovered from that affliction (which was never really identified), as indicated by the writing of my mother on the calendar.

I was greatly moved by this discovery. Greatly moved! I shared it with our children, and thanked the Lord for my life, and all the blessings that He poured on me then and after that time (and before that time, too, since I could well have died at birth through a complication with the umbilical cord). All of this happened in the midst of waiting for the IAMA results to come out!

Shortly after this, the results of the competition came out. While I was a Finalist, I didn't win this time. The winner and runner-up were the excellent guitarists Muriel Anderson and John Floridis. (You can check out their websites.)

In all honesty I would like to have won, and been the first instrumentalist to repeat as a winner. I admit it. Yet look at what the Lord gave me: He blessed me with the revelation of the life-saving thing He had done for me in 1948. Had I not survived that health scare in 1948 with God's necessary assistance, there would be no wife, no 4 kids, no grandkid and one on-the-way, no walking out the faith, no guitar, no music, and no "Breakout." The Lord had done His own "Breakout" on me, in His usual astounding and Fatherly way!

This is just further evidence of what a good heavenly Father we have, and how He operates in so many dimensions of time, space, and purpose in this world. He really does like to surprise and bless us, and all we have to do is believe!