How Would Jesus Respond To An Atheist?

El McMeen considers how Jesus would respond to an atheists accusation: "Why should I believe in a God? A good God, if he exists, wouldn't cause or allow babies to get cancer." 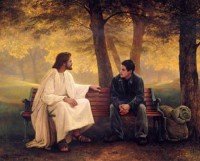 I recently watchcd on YouTube excerpts from two debates, each between a smart and committed Christian apologist and a smart and committed atheist. The atheist used the compelling image of a baby with cancer, and demanded an explanation of why God, if He existed, either caused or allowed that to happen. One Christian emphasized the Fall of Man; the other emphasized the decrees of God.

At the outset, I will state for the record four problems I myself have with atheism:

I admire Christian apologists, and, to paraphrase Ravi Zacharias, they live a life of self-imposed masochism, with all kinds of fiery darts flung their way. I do not want what I write below to be construed as any kind of criticism of the efforts and commitment of our brethren who fight the battles in the trenches of apologetics.

All this having been said, here's what subsequently happened to me: I was awakened in the middle of the night (about 2am) thinking about all this! As I lay in bed turning this issue over in my mind, I had the feeling that the Holy Spirit was leading me down a road to some measure of peace on this subject. How was He doing it? It seems to me that He was doing it by leading me to this question: How would Jesus have responded to the atheist's attack? What would Jesus have said to the atheist?

The first response to these questions must be that we don't know how or whether Jesus would have responded to the atheist. We just don't know for sure. He often didn't follow a questioner's line of reasoning, but took charge, probed and revealed the heart of man, and declared the Kingdom of God. So, in a sense, we are speculating, both about the content of the conversation, and about the order and flow of things. We do, nevertheless, find support in Scripture for our speculation, so let's go ahead and lay out this imaginary conversation between Atheist A and Jesus:

A: "Why should I believe in a God? A good God, if he exists, wouldn't cause or allow babies to get cancer."

Jesus: "Haven't you read the Scriptures? Moreover, I have told my followers to pray as follows: 'Our Father which art in heaven, Hallowed be thy name.' I have thereby confirmed that God is my heavenly father, and that we are two persons, yet He is in me, and I in Him, in a way that may seem mysterious to you."

Jesus: "I understand that; the reason for your unbelief is that you are evil. [Note: Jesus' comment doesn't sound very PC these days. Jesus wasn't very PC, despite efforts of unbelievers these days to act as if He somehow was warm and fuzzy all the time.]"

"Repent, be baptized, and follow me, and I will give you life in abundance that will never cease. You must have taken into account the words I've spoken and the miraculous deeds I've done. In addition, I must go to the cross, to pay a ransom for the many, and I will be raised on the third day."

A: "Your heavenly father, as you call, him, caused or allowed this baby to have cancer."
[Note that A puts no weight on the manifest supernatural works of Jesus, both in the past and stated by Jesus to come in the future. To him, it's all about his argument.]

Jesus: "Do you believe that I can heal this baby?"

[Note: At this point, A has to decide whether he really cares about the baby, or is just trying to score debating points. Let's hope for the best.]

This article is atrocious. It fails to even attempt to answer the questions that the author starts off with at the beginning and then wades into a tirade of baseless assumptions that 'if you believe in jesus then you will know and if you don't then you are evil'. What utter nonsense

this is a typical response which says "there are some things in science we can't yet explain", therefore god did it and not any god, no, my god, and to "prove" it here are some quotes from my version of my teams holy book, and while I can't answer some scientific points yet, I accept everything in my holy book without question or proof.

Your four problems with atheism seem to stem from your erroneous assumption that it's atheism qua atheism that needs to answer them. It doesn't -- individual atheists will have different answers.

As for me, my answers are:
1. I don't know, but suggesting a god did it is only begging the question and explains nothing.
2. Living things are observed to self-replicate; I don't know what kind of 'explanation' you think is missing, but you might be referring to abiogenesis.
3. I get my morals from being human -- religions have somewhat similar morals, but that's from being created by humans, not because some god is involved.
4. You can make up gods to answer your yearnings if you like, but I think that's silly.

The true nature of the universe's beginning or existence has not been answered or demostrated fully by either group. Theology simply asserts to have the answer and it is contingent on the cause and effect argument. The major issue with every effect requiring a cause is that produces a self defeating argument. If the universe requires a cause or creator then God requires a cause. Thus the argument is self defeating because it produces an infinite line of regress. Also if theology had the answer that would indicate the ability to demonstrate how god created the universe. Yet no mechanisms of god's intervention and actions have been demonstrated. Science indicates we have a purely naturalistic universe that requires no primary mover. From a naturalistic point of view, which has qualities that can be demonstrated, we extrapolate that something exists because nothing is more unstable. The nothing we are discussing is the quantum nothing which is directly related to the heisenberg uncertainty principle. A particles location and spin or velocity cannot both be known at one time. This phenomenon has been well documented in many quantum experiments. From this principle we extract that space is actually made up of fields not particles, and the nature of these fields is that they are always fluctuating which is the reason we cannot determine the location and movement of a "particle" at any given moment. The revelation of this is that the vacum of space is not nothing but actually an energetic field with the ability to produce virtual particles. Thus empty space is not actually empty, and nothing is not actually nothing. The idea behind the big bang and the inflationary transition phase is that as the universe transitioned from the inflationary period to normal spacetime expansion the phase transition energy was released in the form of matter which distributed itself according to the microscopic differences in these quantum fluctuations.

It seems that much of your rejection of the ideas of atheism is based upon lack of knowledge. The fact that the universe and life seems inexplicable to you is in no way an argument for the existence of any supernatural entities.

'I don't know, so God did it' is one of the weakest of the apologists' arguments. A child may not know that one and one makes two, but that does not mean the answer is 'God'. There are many people working on subjects like the origin of the universe who can put forth arguments far beyond my and your understanding for the origins of matter and energy. Zeus no longer throws those lightning bolts because we understand their origin in physics. I see no reason to rely on the supernatural as an explanation for the world without evidence.

There is no shame in an honest, "I don't know", when confronted with a mystery. There is shame however in falling into superstition as a way of explaining the unknown.

The question is not why would God allow children to get cancer, the question is why does God kill children, committ sweeping genocides, condone slavery, give virgin child captives to his own army for sex slaves, create a hell for those that practice freedom of religion, indulge in heinous misogyny, torture people to see if they are loyal when he is omniscient and already knows. In short why is God the most evil character ever envisioned by mankind?

The answer is obvious. The early tribes lived in a very dangerous world among powerful and ruthless neighbors. They needed a God that was the most vicious and cruel they could imagine.

We need to stop the God hoax. It is don't too much damage and sucking away too many resources from problems in the society that need to be addressed directly.

The problem with your four points is that they have nothing to do with Atheism. Atheism, simply put, says that no one has given compelling evidence to believe in a God.

1. It does not appear to me to have a credible explanation for the creation of matter.

--- I don't know. But if you are saying that because neither you nor I have EVIDENCE, but you BELIEVE that is fallacious thinking and leads to a God of the Gaps. At one point we did not know where thunder came from, now we do. The same can be said for many, many things. We are not at the apex of knowledge at this point and to assume we are is also fallacious thinking.

2. If my first objection could somehow be met, nevertheless it does not appear to me to have a credible explanation for the self-replicating character of living things.

----- See above. Just because you (or I) cannot thing of a credible explanation at this time in no way means there is not one. Again, to assume otherwise if to yet again fall into the God of the Gaps.


3. Atheists seem to have great difficulty in giving convincing explanations of the sources of any consistent moral codes they follow apart from theistic sources.

----- Interesting. Perhaps you may wish to do a little more research on this. Perhaps read up on Sociology and the psychology of the tribe. Humans are tribal primates and even the lowly tribal bat shows altruism - do you think that they have the ability to think about morality?

4. Atheism doesn't seem to me to be convincing in its explanation of the obvious yearnings of individual people for significance.

----- Really? You really can't understand why a man or woman wants to stand out and be noticed; why individuals are driven to 'peacock'? Really? And you can't extrapolate this drive? If this is true you really are not trying.

In answer to your points...

1 & 2. Atheism doesn't have to explain the creation of matter or the self-replication of living things. And theism's explanation is merely deus ex machina - hardly a compelling argument.

3. Moral codes developed as a result of our evolution as a social species. Every social species has moral codes - chimpanzees, etc. The theist's explanation: deus ex machina again. How convenient.

4. Why should atheists need to explain people's yearning for significance? Why is that a necessity? And again, the theist's "explanation" is merely deus ex machina again - "God did it". Any evidence for that? Of course not!