Jeff Short chats to Cole Moreton who has an impressive journalism career. As chief feature writer of the Sunday Telegraph he produced reports, features, analysis and comment on major events from the Olympics to the death of Nelson Mandela. 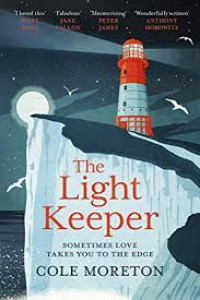 Cole: These days I'm a writer and broadcaster; I write interviews for the magazine The Mail On Sunday; I make documentaries for Radio 4, and I write books. I live on the south coast near Beachy Head, which is where the book is set. I do a bit of music, a bit of wandering, a bit of walking, thinking and praying on the cliffs there. That's me!

Jeff: I think you're a bit modest there with the 'bits'. I was looking at your bio and I see you were interviewer of the year in 2016 at the Press Awards and I thought who has given me this interview?

Cole: Don't worry, Jeff. It was three years ago; things have gone downhill.

Jeff: I'm sure not. So, you've made this step from non-fiction and some serious subjects to a novel and yet the novel, I guess, has got a lot of issues within it.

Cole: It has. The way this developed, 14 years ago I started to write bits of memoir of different aspects of what I'd been through. Some of that was about faith-related stuff then that hived off and became a book called 'God's Still an Englishman' which is looking at British spirituality and culture and the way things have changed.

There were other bits, I started to write about the experience my wife and I had been through of having fertility treatment and trying to have a child. I found that that stuff was too raw to write directly so I began to experiment with writing it with characters. When we moved down here I found myself in this extraordinary landscape, right on the edge of England. You've got this big sky where you can see the curvature of the Earth, the sheer white cliffs and it's one of those places if you walk up there it's what they call a thin place, the barrier between heaven and earth is very thin there. You can feel the divine around you.

In response to that landscape and to that feeling of being close to God up there, the story evolved into the story that is The Light Keeper.

Jeff: It calls upon the local landscape but there are places people might identify with although you've changed them slightly. The lighthouse was derelict but is now restored.

Cole: It's set in a real landscape. It's a disused Georgian lighthouse on the edge of a four hundred foot drop, which is where one of my characters (who is known at the beginning just as The Keeper) lives. He has gone there to do it up with his partner who is an artist but at the beginning of the book she is no longer with him; she has passed on. He is grieving for her and hearing her voice and talking to her. He's caught between going and staying. He wants to go but he can't bear to. It's too much for him. It's like the lighthouse is suspended between the sea and the sky. That place is real. It is now a luxury bed and breakfast. It's Â£225 to stay the night but it's well worth the money. It's been moved back from the edge so it's pretty safe.

Jeff: Talking about the lighthouse and that sense of it being suspended, you've just alluded to faith and spirituality. Do they play a big part in your life?

Cole: Really big part. I've had a faith since I was a teenager. I had a fairly dramatic teenage conversion then spent a good number of years trying to shake that off. And living out the consequences of it, I was a missionary for a bit, worked in refugee camps and so on. I then worked for the Church Times and if you want to shake off your faith, writing about Anglican affairs is a good way to start.

Then in the middle of this fertility treatment I talked about I had a crisis of faith, an anti-conversion experience; my heart was strangely chilled. The thing is, once you've known what it is to be touched by God, you can't really run away from it. I've spent the time since then deepening my understanding of that and coming back to faith. For me, the landscape around me is a really big part of that. It's very easy to believe and it's very easy to talk to God and to pray when I'm out in that landscape.

It's one of the reasons I'm here, really. There's no getting away from it. You can't 'unknow' what you already know; you can't be untouched by what you've been touched by.

Jeff: My impression would be that you work in areas that could be quite cynical, quite hard. Journalism always strikes me as a hard-nosed profession.